What is port security?

Port security is a strategic initiative whereby a set of protocols are enacted to protect the various input/output computer ports. The ports are safeguarded from unauthorized intrusions by restricting access to all devices by default except for a select number of authenticated, peripheral devices.

When it comes to networks, those managed by organizations have especially sensitive data stored within their endpoints and network shares. One of the ways to effectively manage port security on a large scale is to enforce policies through port control software that can automatically filter device connection traffic for all managed computers within your enterprise. Port security solutions ensure that only the devices that are verified as belonging to trusted users are allowed access.

Why is port security important?

To prevent hardware based attacks

Ports, being ubiquitous among networks, are one of the easiest entry points in a computer. They are a direct avenue to a computer’s internal circuitry. If exploited by malicious users or inadvertently mishandled by negligent ones, ports can pave the way for hardware-level attacks like BadUSB attacks.

To prohibit unauthorized entry into the network

Another risk with unsecured ports is that they facilitate connections between the computer and external hardware assets. Sometimes these external devices are shared amongst other computers in the immediate vicinity such as a designated printer or scanner. Thus, to some degree, interconnectivity between different computers in the network can be established through ports. Attackers can leverage this loophole by exploiting an entry point in one computer and gradually infiltrating other endpoints.

Because ports remain physically unguarded, it is vital to have software barricades, such as an effective port control solution, to avert these hazardous intrusions.

What types of ports should be secured?

USB ports are the most prevalent type of port found on modern computers. Certain types of input/output devices are used throughout most businesses, such as storage media, imaging devices, CD-ROMS, and modems. Although typical USB security software can aid in the granular management of these standard peripheral gadgets, there are still numerous other less common input devices, such as light pens, joysticks, and trackballs, and output devices, such as GPS trackers, projectors, and plotters, utilized across various niche industries that may not be detected.

To prevent lesser known peripheral devices from bypassing your security, it is best practice to protect the device connection interface instead, which is the USB port. While standard devices are individually monitored, Device Control Plus enhances USB security by keeping a close watch on USB ports that serve as entry points to niche peripheral devices. You need only add the device IDs of the trusted peripheral devices to the whitelist and then only those devices will be permitted to access the computer.

A common type of parallel port that is found in later versions of PCs is a line printer terminal, or LPT for short. These ports serve as an interface between personal computers and many devices—most notably printers, which are often a silent vector for attacker intrusion. Even printers built by popular manufacturers have a myriad of vulnerabilities, and since parallel ports support older printer models, organizations are likely to run into even more vulnerabilities. The outcomes of attacks that occur via printers can include:

To prevent attackers from exploiting vulnerable printers and utilizing them for harmful purposes, you should leverage a solution to exercise parallel port control. Device Control Plus stays ahead of traditional port security software by helping you block all unsecured devices and only authorize the devices that you trust. Devices that are appropriately patched with all security updates and do not have any vulnerabilities can be considered trusted devices.

Serial ports, also referred to as COM ports, are legacy interfaces for peripherals such as mice and modems that are found on IBM-compatible computers. In a serial port connection, data is transferred in a bit by bit sequence. This makes for a cost-effective interface for scientific instruments such as oscilloscopes and function generators, which only require low speed, short-range connections to carry out their purposes. For these reasons, serial ports are still used today in industries that specialize in automation, diagnostics, embedded systems, point of sale systems, etc. 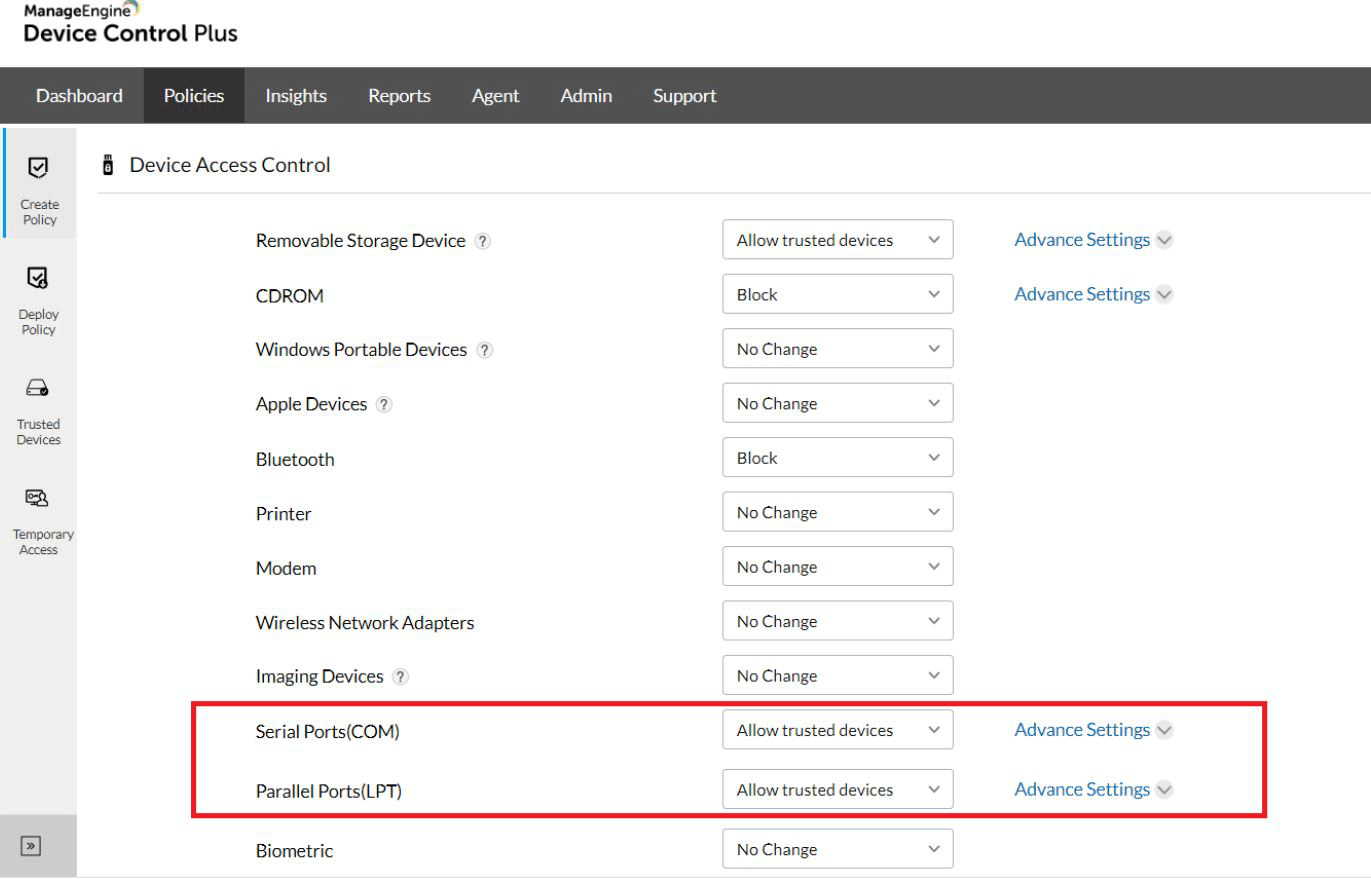 If a company has a bring your own device policy or lets its employees bring their computers to unsupervised environments like their homes or public spaces, their devices’ serial ports will be susceptible to physical exploitation. In these situations, a nearby intruder can plug in a device, infiltrate the computer, and extract sensitive content. Because these ports are only used on occasion, detecting the intrusion may also be delayed. By the time the threat is detected, the organization’s security may already be comprised. For this reason, a robust serial port control solution is necessary to regulate the device connections made on legacy serial ports and immediately detect any potential threats.

How Device Control Plus can help

Computer ports enhance user productivity as they provide easy integration between computers and many peripheral devices. However, they are also easily accessible and expand an organization's attack surface. Device Control Plus is a computer port security solution that enables you to create a list of trusted devices for each of the port types mentioned above and permit only those devices to connect to your organization’s computers. Moreover, if an unauthorized device attempts to connect, it will be blocked and you will immediately receive an alert about the incident.