You can click and start reading the chapters from below. We've also sent the
link to your inbox for future reference.

According to IBM Security, the average cost of a data breach in 2021 rose to

With more companies moving their businesses online, securing web applications and web servers from cyber threats has become imperative. By exploiting vulnerabilities in these servers and applications, hackers can easily gain access to sensitive data and lead to serious financial ramifications.

In this guide, we have covered some of the most common types of cyber attacks on web servers and how you can detect them by analyzing your logs.

The Verizon 2021 Data Breach Investigations Report analyzed 29,207 security incidents, of which 5,258 were confirmed breaches (a significant increase from the 3,950 breaches analyzed in last year’s report). If we look deeper into the breach pattern, of the top assets that were exploited, web servers constituted more than 60%. Web servers were one of the main attack vectors, contributing to 80% of the breaches detected and reported last year.1

As you may already know, web servers face a multitude of threats, such as brute-force attacks, SQL injection attacks, cross-site scripting, and denial-of-service (DoS) attacks. A single successful attack can severely affect an organization's reputation, cause substantial financial loss, and undermine customers' trust. Enterprises need to stay one step ahead to avoid being the next victim.

So how do we detect these attacks before it is too late?

Log analysis can provide a lot of insights on what is going on in your network.

Every event that occurs in a network is recorded in the form of logs. These logs provide detailed information about the event, such as the time of occurrence, where it occurred from, as well as who was behind it. Analyzing these logs can provide insights on the activity and help you detect the warning signs of cyberattacks and threats in your network. If you are a security admin, we recommend you look for actionable insights in your log data to detect and stop attacks before the damage is done.

This guide elaborates on some of the most popular web attacks and includes tips on how you can detect them by analyzing your web server logs.

First, let’s go through the basics of log analysis. Web server logs provide valuable information related to traffic—who sent the request, the date and time at which the request was sent, and what the requested file was.

Some of the most common web servers used in today's world include Apache, IIS, and NGINX. Each web server's log format differs from one another.

Apache’s web server, officially known as the Apache HTTP Server, is the most popular web server in the market, with a market share of 40.19% as of March 2022.2 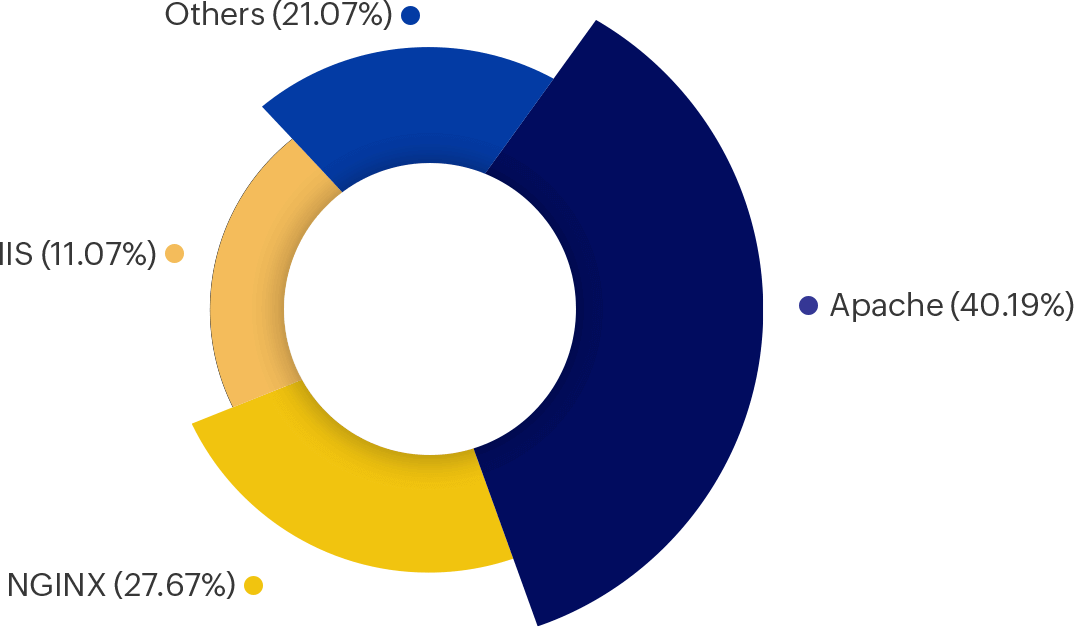 1. Access logs: They contain information regarding all the requests processed by the server.

2. Error logs: They contain information regarding errors that are encountered while processing requests.

The following table denotes the various HTTP response status codes that can be returned by the server.

This log format is very similar to the Common Log Format except for the two additional fields at the end of the message.

Some of the most popular cyberattacks in today's world include brute-force attacks, SQL injection, and DoS attacks.

Take a look at these alarming stats:

In this resource, we are going to explore each of these attacks, along with techniques to detect them in their early stages.

In a brute-force attack, hackers try to guess the login credentials of a user using the trial-and-error method. Brute-force attacks are more common in public-facing, aka internet-facing, systems. Therefore, any website or application's login form is likely to be the target of a brute-force attack. Attackers use a bot or script to try out different combinations of usernames and passwords until they crack open the account. Apart from usernames and passwords, attackers also try to guess passphrases, emails, links, or directories and find hidden webpages. By exploiting hidden webpages, they can gain access to the primary website.

Although time-consuming, brute-force attacks are still very popular and have a high rate of success.

Some common tools used for brute-force attacks include THC Hydra, Aircrack-ng, John the Ripper, and Hashcat.

Repercussions of a brute-force attack

In the above sample, you can see that the attacker (with the same IP address in each request) is targeting the administrator account's password.

Implement a security information and event management (SIEM) solution that:

The SQL injection technique refers to the insertion of SQL queries in the input fields of web application forms that accept inputs without validating them. Instead of entering the expected input, attackers enter (or inject) an SQL query to bypass authentication and access or modify the contents of the underlying database. In spite of being one of the oldest attack types, it is still very popular and dangerous.

Repercussions of a SQL injection attack

If the attack is successful, it can lead to:

In the above sample, you can see they’re using SQL commands, encoded characters, as well as the vulnerability scanner sqlmap.

Implement a SIEM solution that:

It could be because of an ongoing DoS attack. In a DoS attack, the attacker's goal is to flood a target web server with superfluous requests, exhaust its resources and trigger it to crash so it becomes inaccessible to its intended users. When the targeted web server is bombarded with too much traffic in a short span of time, it becomes overloaded and is unable to process requests coming from legitimate users. Healthcare and education sectors are the most affected by this type of attack as business downtime is very costly in these industries. The education sector saw a 41% increase in DDoS attacks between July 2020 and March 2021.6 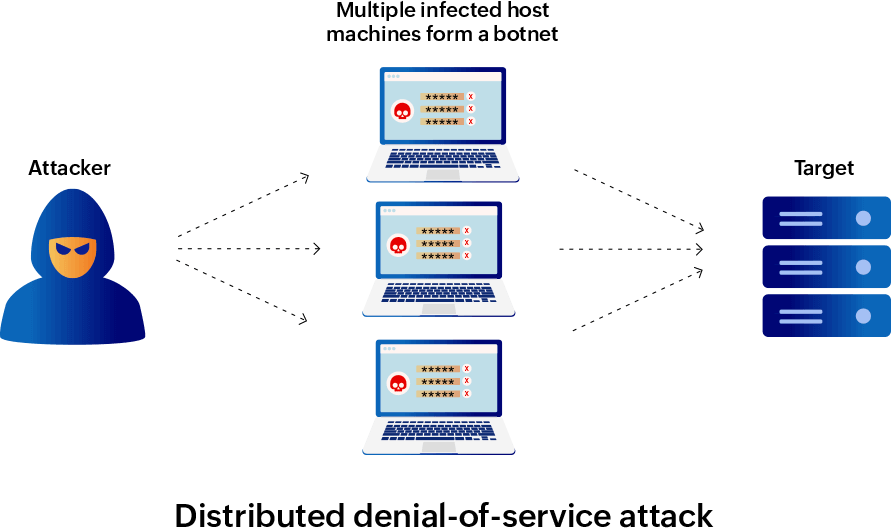 What is the difference between a DoS attack and a DDoS attack?

The DoS attack technique uses one malicious source that floods the web server with a massive amount of requests.

On the other hand, in a DDoS attack, multiple malicious sources that operate together attack a single target simultaneously. These multiple host machines are known as bots or zombie systems. Together, they form a botnet that is used to perform large-scale attacks by cybercriminals. The real owners of these compromised systems might not even know that their system is acting as a bot as the system continues to function normally. Since superfluous requests in a DDoS attack are coming from multiple locations, the exact origin of the attack is disguised, making it challenging to detect and stop it.

A DDoS attack has the potential to cause serious financial ramifications to small and large enterprises. It is a huge threat to businesses, nonprofit organizations, and governments around the world. Imagine a large-scale attack that prevents customers from accessing an e-commerce platform. It could lead to a loss of millions of dollars for the enterprise running the business.7 And once a business has been under attack, there is an 82% chance that it will be attacked again.8

With the surge in the usage of IoT devices, DDoS attacks have become more and more prominent. Sometimes cybercriminals also employ DDoS as a distraction tactic while executing other serious cyberattacks.

The best preventive method you can take for a DoS or DDoS attack is to continuously monitor and analyze your network.

Early detection of a DDoS attack

The following issues could indicate a possible DoS or DDoS attack:

You have hundreds of logs where:

Monitoring a 404 response code would be a much better choice compared to tracking a 503 response code as the latter indicates that the server is already down and the threat cannot be prevented.9

To find out if your server is under attack, you can open the Windows Command Prompt and execute the following command to view the list of active connections along with their connection state.10

Continuously monitor your network traffic for unexpected surges. Analyzing the origin and type of traffic can provide additional insights. Most attackers will test your network defenses before executing a full-fledged attack. Look for unusual data traffic coming from suspicious IP addresses or geographic locations.

Implement a SIEM solution that:

Manually monitoring and analyzing terabytes of log data on a daily basis is impossible. A SIEM solution automates the entire process of collecting log files from various network devices, parsing them, and analyzing them to provide valuable insights to the security team. By auditing web server activity, a SIEM solution can instantly detect any attack and alert you in real time.

ManageEngine Log360, a unified SIEM solution with integrated DLP and CASB capabilities, thoroughly audits IIS and Apache web server logs and provides actionable insights through predefined reports and alert profiles. Its real-time correlation engine and threat intelligence platform can help enterprises detect data breaches in real time. Log360's graphical reports will give you detailed information regarding important events taking place in your web server, such as failed authentication or bad URL requests. You can receive instant alerts for events that pose a threat to security. This is how a SIEM solution like Log360 helps you reduce the time it takes to detect and respond to threats.

4. "The State of the Internet"

5. "Kaspersky finds patch management combined with robust password policies reduces the risk of cyberattacks to businesses by up to 60%"

8. "Hit by DDoS? You will likely be struck again"

9. "What Is a DDoS Attack and How Can You Detect It With Log Analysis?"

10. "How to Detect and Analyze DDoS Attacks Using Log Analysis"