Networks, before automation, were handled or maintained manually. Because of this, admins had great management overhead and found it difficult to validate networks based on their outcome or business objective—their intent. Also, many admins did not feel the importance of network validation at that time, which led to many disastrous network mishaps.

Nowadays, networks have become more complex and near-to-impossible to handle manually. This has paved the way for network automation using network automation tools, which has greatly minimized the percentage of network mishaps worldwide.

Now, to further minimize network-related disasters, network validation has been introduced, which combined with automation provides the smoothest network process for your network infrastructure.

Network validation is the process of inspecting whether your network environment is working or functioning as per the intent required. Network validation starts from physical connectivity and includes the protocol stack. Here, each layer of network architecture is validated according to its intent.

Disadvantages of not performing network validation in today's network world

The what, when, and how of network validation 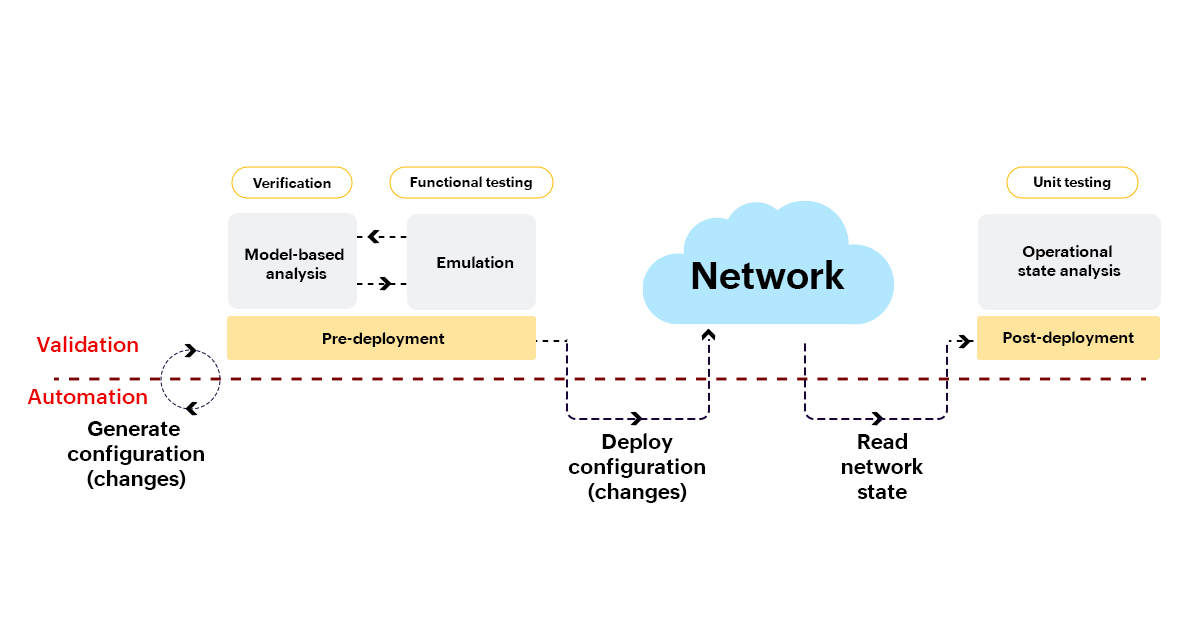 What should be the level of validation?

Verification is the starting step of network validation and it is done to ensure that all the network process scenarios in your network infrastructure are correct. Some of the important aspects that are covered during verification are whether DNS packets are reaching DNS server, which routing paths are specified, and the availability of services after failure.

Functional testing is used to check for network behaviors to see whether they are working as intended from end to end. This can include confirming that routers are using the correct routing protocols and path, packets are correctly reaching servers without interruption, and the network traffic is using the intended backup paths if it is blocked.

Unit testing is used to inspect various aspects of the devices present in the network, such as whether they have correct configurations, accurate ASN, and more. This form of validation is a simple and effective testing method where the root cause is identified immediately whenever the test process fails. However, with unit testing you will not have a clear picture of end-to-end processes.

When must validation be performed?

Pre-deployment validation is before any changes (new or modified) are pushed to your network infrastructure. Here, all the changes to be pushed are verified thoroughly before full deployment, keeping the intended network operations in mind.

After deployment is complete, another validation check is made to confirm whether the deployment had its intended impact. This method does not fully stop errors, but it will help stabilize the production from disastrous mishaps.

How is validation performed?

There are three approaches for network validation:

Emulation is a test bed for network engineers to use for safely deploying and checking configurations. This approach is useful for predicting how a network environment will behave, as long as it consists of production software similar to emulated environments.

Operational state analysis is when network engineers push changes to network configurations and check whether they work with the intended purpose, such as if newly configured router configuration has made any intended process. The main advantage of this approach is that it checks the behavior of entire networks. However, since it supports only post-hoc validation, there is a higher chance of leakage in your network.

Curious about pricing? Get a personalized price quote according to your requirements.