Conditions and Actions available in Workflow

Sends ICMP packets to test whether the device is responding.

Executes a trace route command on the end device.

Add a Time Delay:
Adds a delay to the execution of the subsequent operation.

Logs off, shuts down, reboots or powers off a remote Windows device forcefully.

Tests whether a service is running or not.

Provides the list of active services running in the device.

Tests whether a process is running or not.

Stops a process running on a device.

Check whether the URL for its availability.

Deletes a file via FTP.

Move a file to another directory within the same system via FTP.

Renames a file via FTP.

Writes the given content in a file (.txt) and uploads it to the remote device via FTP.

Posts the output received upon querying an URL, in the workflow logs.

Checks the existence of a file in the specified path.

Get File Size
Checks the file for its size and execute tasks accordingly.

Compresses a file with Windows Compression/Deletes a file.

Copies/moves a file from one folder to another within the same computer.

Moves files that match the age specified to another folder.

Uncompresses a file that had been compressed with Windows Compression.

Checks the existence of a folder in the specified path.

Creates a folder in the computer.

Copies/moves a folder to another folder within the same computer.

Adds note to an alarm.

Generates an alarm in OpManager.

Execute script on remote Linux machines and retrieves the output. Depending on the input, this script will either execute from OpManager server or from remote machine. Its success/failure is decided based on its exit code. If the script returns with the exit code 0, then it is consider as success, any other value is consider as failure.

Script execution is done by the OpManager server on the destination Windows machines and retrieves the output. Its success/failure is decided based on its exit code.
If the script returns with  the exit code 0, it is consider as success, any other value is consider as a failure.

Logs a ticket in BMC Remedy.

Sends a mail to the email IDs specified. This is useful to notify the result/completion of a task in the workflow.

Opens a popup window with the given message on remote computers.

Sends SMS notifications to the mobile number specified. This is useful to notify the result/completion of a task in the workflow.

OpManager sends in a slack message as a notification for the completion of a task in the workflow.

Variables:
Variables are used to append dynamic values in a field of a task. Following are the variables:

${DeviceName} - Name of the device to which workflow has to be associated. Can be used in all fields

${WorkflowName} - Name of the Workflow that is to triggered. Can be used in all fields.

${Alarm.ServiceName} - Name of the service for which an alarm is raised.

${Alarm.URLAddress} - URL address for which an alarm is raised.

${UserName} - Username of the device.

${Device.DisplayName} - Display name of the device for which an alarm is raised.

${Alarm.ProcessName} - Name of the process for which an alarm is raised.

$message - Alarm message will be displayed

Variables can be better understood with an example. Following is the workflow that has to be triggered as an action whenever a service down alarm is raised. 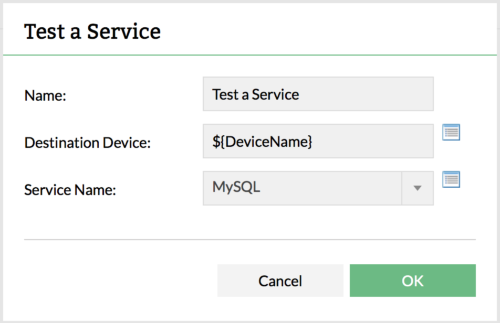 Task 2: The result of previous task (service up or down) is added as notes to the alarm using ${Result} variable. (This variable is not yet implemented in the current build, it will be notified once implemented for use.) 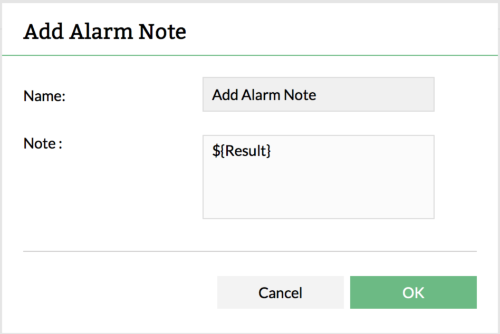