Network routing is an important part of network communications. Routing helps your network components select the best network path from the available choices. This makes network communication efficient and reliable. The hardware components that enable this are called routers. Monitoring and managing routers are an indispensable part of network administrators' everyday tasks. Since routers can make or break your network connectivity and availability, it is important to understand how routers and routing techniques work. On this page, we dive into the details of:

How does network routing work?

Routers maintain a log of all the available network paths in a built-in database called the "routing table". This table needs to be constantly updated to ensure the paths logged are complete per the real-time path in the network.

Every time a router receives a network data packet, it inspects the packet header to obtain details about where the packet is headed. Based on this information, the router checks its routing table and forwards the packet in the most effective network route. This way, the packet traverses from one router to another until it reaches its destination network and ultimately the destination device.

For instance, in the network below, route 2,4 might seem shortest and more efficient when compared to route 1,3,5. However, this route might be suffering from low bandwidth and network connectivity issues. This is where network routing protocols step in and calculate the best route, i.e., route 135, and forward the network packet to network 1. Which is then forwarded to network 3, and so on. 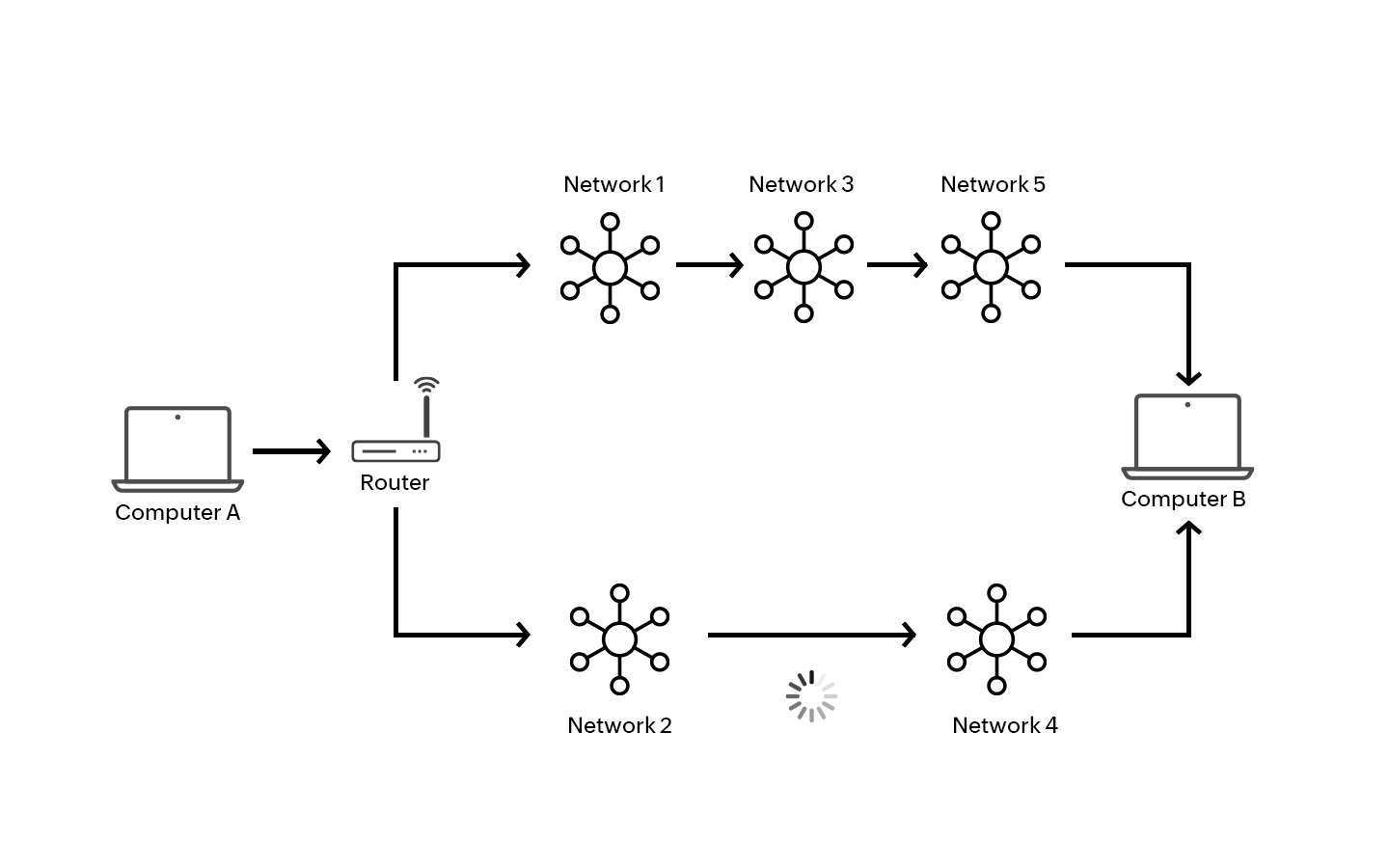 Routers vs. other network communication enablers

Before we dive into the details of routing protocols, let's quickly learn about the distinct data packet management functionalities of routers when compared to similar network components–switches and modems.

Routers vs. switches: Both routers and switches handle data packets in the network. While switches enable communication by handling and forwarding IP packets between devices within the same sub network, routers manage the packets between multiple LAN and WAN networks.

Also, core routers act as the core of your network communication. They handle high-volume data packets and enable forwarding between the connected networks. They do not communicate with the external world, such as the internet.

This is where edge routers play an important role as they enable communication between the external internet and your core routers.

Based on the routing information exchange technique followed by the routing protocols, they are classified into three main categories as follows:

Here's a look into the five common routing protocols organizations deploy based on their networking requirements,

RIP is one of the earliest routing protocols popularly used in intra-domain networks that rely on DVR. Network admins deploy two versions of RIP–RIPv1 and RIPv2 based on their networking requirements.

While RIPv1 and RIPv2 can be used across WANs and LANs, their limited capabilities posses scalability challenges to network admins. For instance, RIPv2 can support router journeys for 15 hops or less. To overcome this difficulty and enhance routing scalability and communication, CISCO routers came up with two other protocols mentioned below.

OSPF is a classless link state routing protocol commonly used within autonomous networks. It operates by selecting and forwarding the IP packet through the shortest network path to reach the packet's destination. OSPF does this by first building multiple databases on the network's topology with information from the link state advertisements by other routers in the network. These advertisements offer a detailed description of the network paths, distance, and resource consumption. This information help OSPF identify the shortest path for the IP packet and forward the IP packet to its destination. OSPF also offers various authentication capabilities for enhanced data security.

This has made OSPF a widely used routing protocol in large, enterprise networks.

EGP simply focuses on reachability and communication between autonomous systems. Its routing table includes information such as the list of recognized routers, routing costs, and the addresses of all the nearby routers. This helps the routers establish a list of neighbors for routing, checking their status, and updating if any change has been detected. While widely used during the early days of networking, many network admins have now replaced it with border gateway protocol. This is due to EGP's limited capability to handle tree-like topologies and its inability to support multipath routing.

BGP is the latest and a popularly used routing protocol in the networking world. It is built on the foundations of EGP and is classified as a distance path vector protocol. BGP has two variations based on how it is used.

BGP works by choosing the best path for the packet to reach its destination. By default, the shortest path is selected as the best path. However, network admins can configure BGP to choose the best path based on different metrics, such as the path cost. Network admins can also configure BGP manually to automate network discovery and topology information updates. Also, BGP offers enhanced security with its authentication capability which allows only approved routers to exchange routing information with each other. These routing capabilities offered by BGP have helped network admins to configure network routing as per their networking needs.

Routers and routing protocols, and why you should care

How ManageEngine OpManager helps you seamlessly manage your network routers

OpManager's advanced router monitoring capability helps you keep a close watch on your network router's performance, health, and uptime. It helps you to track router availability using different availability monitoring polls such as ICMP, TCP, or SNMP, and enables you to,

That's not all! OpManager has much more to offer for advanced and simplified network performance monitoring. Interested? Schedule a personalized free demo, or download a 30-day trial of OpManager today!