You're adaptable. Your patching tool should be, too. With Patch Manager Plus, tailor your patching policies to meet specific industry needs. Select the deployment features you want most with native OS and third party application patching. In simpler words, Patch Manager Plus will work the way you do.

Patch Manager Plus lets you create patching policies to enable patching across all your enterprise's endpoints irrespective of their location and despite them being mobile, remote, or asleep. 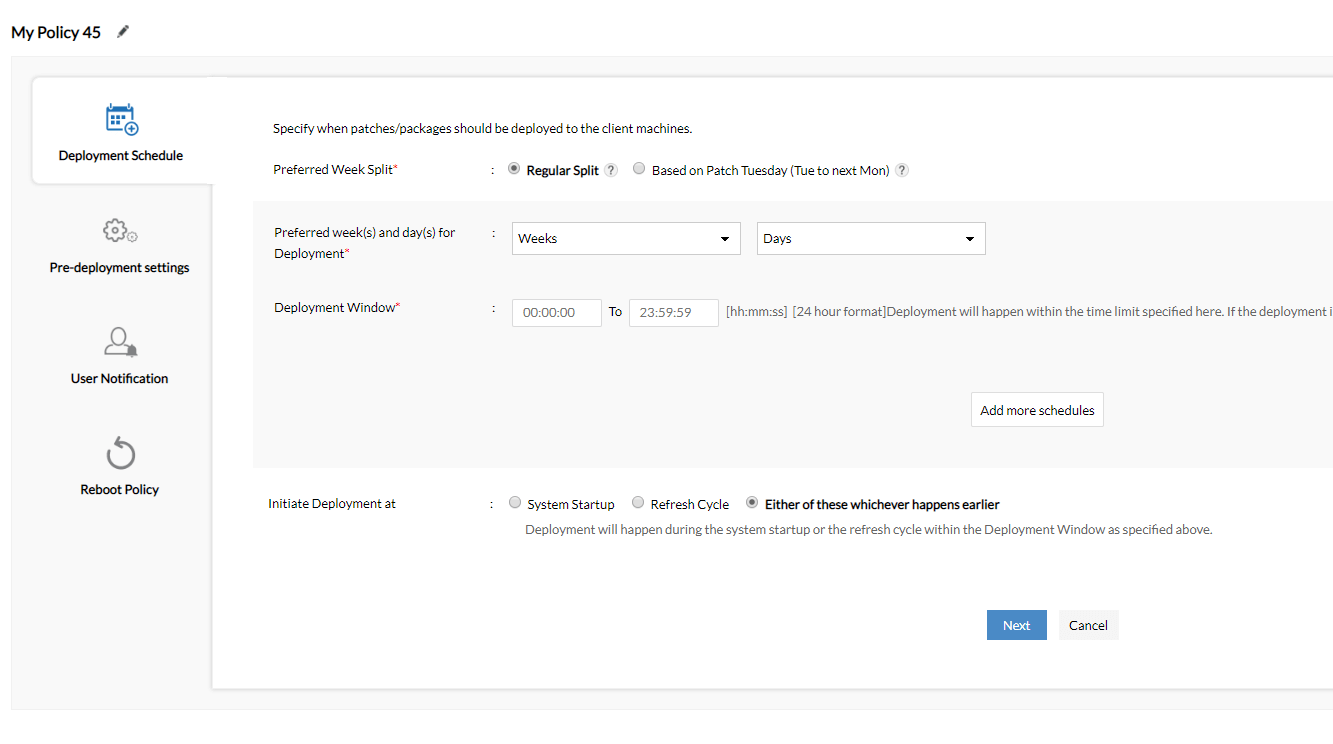 One deployment doesn't fit all, because enterprises vary with different sizes and different patching needs. Create a Deployment Policy to specify the installation and reboot options to be performed on the client computers while deploying a patch, software or a service pack. The multiple deployment settings will help decide when to deploy a patch to the operational environment, to plan how and when that deployment will take place, in order to ensure that it does not compromise business critical systems and applications.

Notify the user about the deployment

Turn ON computers before deployment

If you wanted the updates to be deployed to the computers, which are turned off, then you can enable the check box to "Turn On Computers before deployment". Enabling this option, will allow the administrators to deploy the configuration to the target computers, which are within the network but turned off. If the target computers are available in the Corporate LAN/WAN network, then those computers will be turned on using Patch Manager Plus 's Wake On LAN feature and the configuration will be deployed. This feature will not work for computers which are not available in the corporate LAN/WAN.

Deployment of certain patches that are related to OS components, may force an immediate reboot; a critical operation for many environments especially when production servers are involved. Business-critical computers may have specific times at which changes and computer restarts are permitted. Here, the deployment of a software patch or any system restarts that are required should not be scheduled. Patch Manager Plus lets you customize reboot policies post deployment. Patch Manager Plus offers a choice of the following reboot options:

For version 10.0.405 and above the reboot policy has been enhanced the following way.

Bearing in mind how essential rebooting a system is , there’s always a pressure on the sysadmins to ensure the reboot occurs successfully but also during the most convenient time thus not interrupting the enterprise’s productivity. Patch Manager plus’s flexible reboot policy helps achieve this by offering the following options for reboot :

Note: The postpone time intervals that are shown to the end user is dependent upon the force reboot timing (if configured by you). For eg. If you have configured force reboot on a system after 4 hours from when the first reboot prompt was shown, then, the end user will be shown options to postpone lesser than 4 hours.

Configuring Force Reboot ensures that your system is rebooted even if the end user fails to do so. The force reboot prompt appears exactly after 'x' hours from when the first reboot was shown and the system reboots immediately after the notification times out. Reflecting the correct status of the patches (post patching) is important. If you choose to shutdown your system post patching, you may enable the 'restart and shutdown' option. This ensures that your system reboots in order to reflect the exact status of the patches before the system shuts down.