Dynamic Host Configuration Protocol (DHCP) is a network protocol that enables a DHCP server/network server to dynamically allocate IP address, subnet mask, default gateways, and other network configuration parameters to requesting devices. It automates the mundane IP configuration task of the network admin by efficiently automating the IP allocations, and minimizing IP waste and IP conflicts. The DHCP server can dynamically allocate IP addresses to network devices from its pool of addresses, and reclaim them. In this document, we discuss:

To get you started, here is a list of terms that you need to know to understand DHCP better.

DHCP Server: A network server that is configured to run DHCP service. DHCP servers are responsible for automatically assigning IPs to network devices. The server data store contains a pool of IP addresses that can be allocated to requesting clients.

DHCP Client: A network device, such as laptop and printers, that supports DHCP client services. The DHCP clients are capable of requesting the DHCP servers for dynamic IP addresses, and network parameters in order to communicate over the internet.

IP Pool: A set of sequential IP addresses that a DHCP server can assign to its requesting clients.

These are fixed address allocation and are not subject to change at any point during networking.

Dynamic IP: Dynamic IPs are IP addresses that are automatically assigned to the network device by an address provider, such as DHCP servers. These allocations are subject to change. A device that supports dynamic IP allocation isn't required to have the same IP address every time it connects to the internet.

For example: The IP address assigned to your device while connecting to a free Wi-Fi can change every time you make a fresh connection. 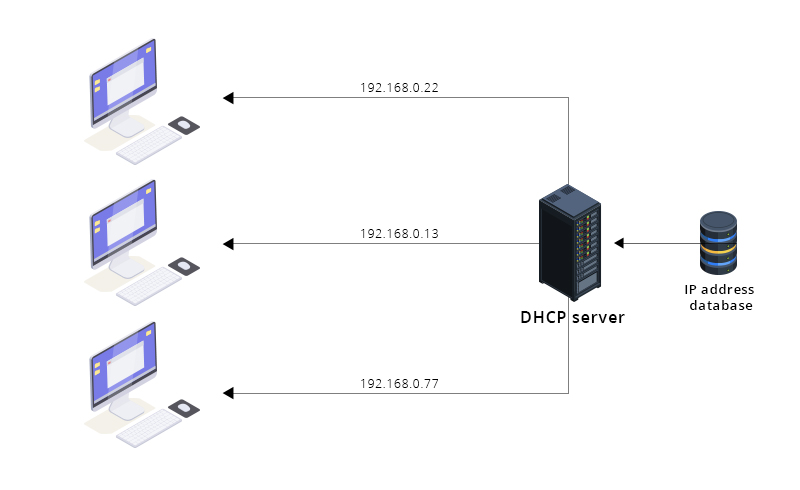 Since DHCP enables dynamic IP address allocation, the address allocated to a DHCP client device is not fixed. The DHCP server does not permanently allocate an IP address to a device, but provides it for a particular time period.

At the end of the lease period, if a client has not requested a renewal, or if the server has not received a renewal request, the lease of the allocated IP expires. This causes the DHCP to reclaim the IP and related network configurations, and add it back to its pool of IP addresses.

Efficient use of IP address space with DHCP

As noted earlier, every DHCP server has a pool of IP addresses. Any IP address within this pool can be dynamically assigned to the requesting clients, and reclaimed back to the pool.

All the IPs the DHCP server’s IP pool has been assigned now.

Each device stays in the network for two hours and then disconnects.

Scenario 1: No lease period. (IPs are assigned permanently with static allocation.)
When another device, D, enters the network after two hours, it can not connect to the network as there are no IP addresses available within the IP pool of the DHCP server. All the IPs have been allocated to devices A, B, and C permanently.

Issue: In both of these scenarios (with and without a lease period), with a pool of 3 IP addresses, the device D could not connect to the network.

Solution: The solution is to implement DHCP with a lease period of two hours as the requirement.

Thus, when device D enters the network, the lease for device A would have expired and the IP 196.128.12.1 would have been reclaimed back to the IP pool. This IP can then be assigned to device D.

The 4 steps of DHCP: The DORA Process

The process of the DHCP server assigning IP address and other network configuration parameters to the network device happens in four steps: 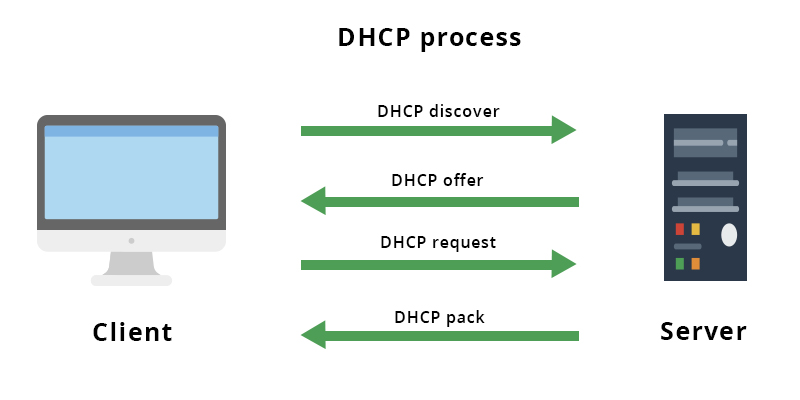 For a device to communicate within a network, it requires an IP address. A DHCP client device acquires the IP address and the network parameters by broadcasting a UDP packet called DHCPDISCOVER within the network.

Upon receiving the DHCPDISCOVER broadcast, all the non-authoritative servers discard or ignore the message. DHCP servers within the networks receive and process the broadcast packet.

Here 192.168.31.9 is the DHCP server that offers an IP address from its pool. Traditionally, this offer message is sent to the client by specifying the clients hardware or MAC address.

On receiving more than one DHCPOFFER messages from the servers in the network, the client sends a DHCPREQ (DHCP Request) message only to the DHCP server whose message was received first by the client. Other offers are discarded or ignored.

Upon receiving the DHCPREQUEST message, the DHCP server assigns the IP address to the client, and logs it in its data store. The server confirms the allocated IP address, subnet mask, and default gateway details by sending an DHCPACK (DHCP acknowledgement) message.

The client can now start using the allocate IP and network parameters.

The DHCP client configures itself with the received network parameters.

Devices can send broadcast messages only within the network they are a part of. They can not broadcast messages across networks or subnets. When there is no valid DHCP server within a network, a device in that network can not acquire an IP address as it can’t broadcast DHCPDISCOVER messages to the servers outside its network.

This is problem is solved by using a DHCP relay agent.

The two ways to address this issue are to:

Why is a relay agent, and not a DHCP server used for subnets?

Using a separate DHCP server in network B introduces two difficulties when compared to using a relay agent:

Configuring a separate relay agent makes the process much easier. The relay agent can be a device within the network, or the network router itself can be configured to provide DHCP relay service.

The base DHCP has no standard authenticating or validating mechanisms. This can open up the network to:

One of the common DHCP attack is DHCP spoofing.

To avoid this attack, network admins configure DHCP snooping in the network.

DHCP snooping enables a switch to process a DHCPOFFER message only if it had been sent through a trusted port.

The process of DHCP snooping involves marking all the ports as untrusted initially. The network admin then marks only the valid DHCP ports in the network as valid. When sending out a DHCPDISCOVER broadcast, the client drops all the DHCPOFFERS received from untrusted ports, and sends a DHCPREQUEST only to the offer that has been sent through the valid ports. Thus, packets that might have been sent by attackers are discarded. 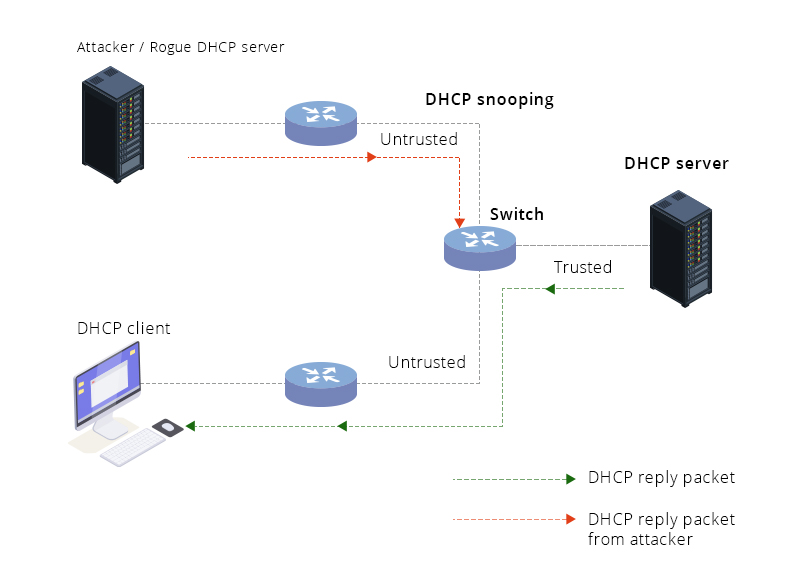 DHCP snooping strengthens the DHCP infrastructure in a network.

Network admins can configure DHCP servers and clients manually, and view the IP lease and configuration of the DHCP clients using native commands. A few of these are listed in the table below.

Although native commands enable DHCP configurations in the device, configuring DHCP servers and clients using these commands is time-consuming and tedious as a network scales. To administer DHCP servers in large organizations, network resource management software, such as ManageEngine OpUtils is recommended.

Why is DHCP used?

DHCP servers are the building blocks of the network infrastructure. Due to their ease of operation and use, DHCP servers are employed in operations small and large, from home networks through enterprise-level networks.

The advantages of using DHCP servers are:

Optimal use of IP address space: Manually assigning IP addresses to devices in a network may lead to IP waste as IP addresses remain allocated even after the device disconnects from the network.

IP Reservation: DHCP enables specific IP addresses to be reserved for specific devices.These address are not allocated to other devices even when the assigned devices have been disconnected from the network.

Reduces IP conflicts: Manual allocation may cause more than one device to be assigned the same IP address, leading to IP conflicts. DHCP IP leasing eliminates this issue.

Easier management: The DHCP data store maintains user logs, such as the user to whom IP address is allocated, its lease period, and other network parameters.

New to OpUtils? Schedule a free demo with a product expert or take a feature tour to see how OpUtils can help manage your network resources. You can also download a 30-day free trial to deploy and try OpUtils hands-on in your network. Have a price quote in mind? Let us know.