Command execution starts with the command with the Sequence number 1 and proceeds with the flow. If no condition values are specified, then it works as the same way as it does in the existing implementation. If the condition attributes are specified in the command, then the command response is taken from result and based on the condition and value attributes the success or failure is decided. If it is success then, the next command to be executed is taken from Success attribute. If the condition fails, then the next command is taken from Failure attribute. If failure is not specified, the execution will be halted. The flow can be diverted in any direction, both forward and backward directions.

Also user can halt the execution for any success and failure conditions by specifying the value as "end" / "END". Advanced Script execution mode of Configlets are commonly used in the below cases.

Auto Loop Detection: if the command flow tends to an infinite loop, it would not be detected automatically by NCM. User should take care of avoiding such infinite loop cases. In case, if user is facing the looping issue in some specific scenario and he / she wants NCM to take care of Auto Loop Detection, there is an option to enable this feature. In Client / Server settings page, enable Enable auto loop detection in Advanced Script Execution mode configlets checkbox to handle Auto Loop Detection. If this is enabled, configlet execution work flow will be terminated, when the same command line is executed more than thrice.

Above is an example configlet for uploading an os image file from TFTP server to cisco ios device.

Let us take the first command, <command prompt=']?'>copy tftp: flash:</command>. This describes, when you exeucte a command copy tftp: flash:, it will prompt for a tftp host name ending with [hostname]?. This also determines that the next command (TFTP_SERVER_IP) can be sent after seeing the prompt.

Let us take the fourth command, <command prompt='confirm'> %DESTINATION_FILE_NAME% </command>. This indicates, once you sent a destination file name, it will prompt you for confirmation.

The same format we can use it for prompt changes such as configure mode. All the configure mode commands will have a different prompt than usual.

To determine the execution status based on the response for a command, we need to add "ErrorString" attribute for that command as shown below. Consider the below configlet script to export sflow from the brocade switch to any Flow analysing tool.

In case the above command is not supported in a particular series, it will not be executed properly. As mentioned initially, we were unable to determine the error based on the response and the execution result is decided as Success, even though it originally failed in the device. Refer the below screenshot for the same. 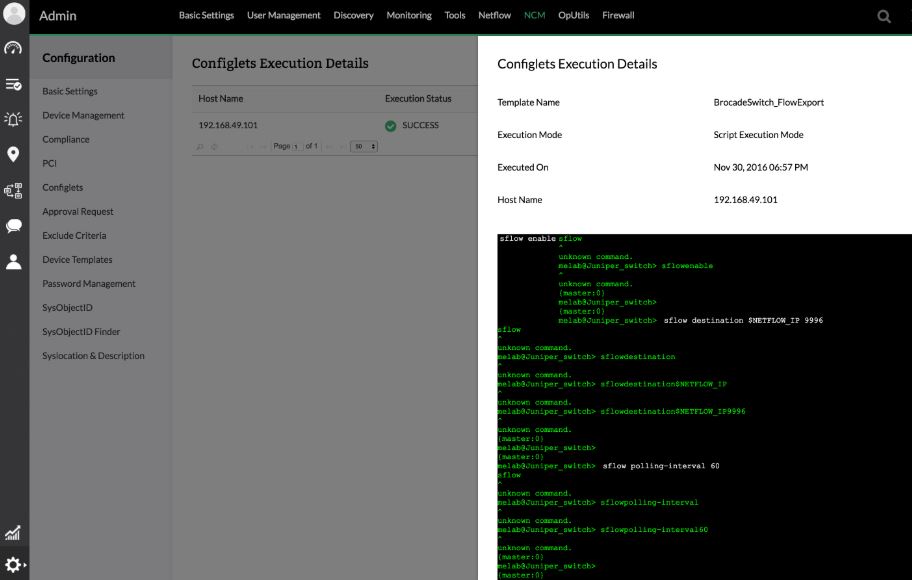 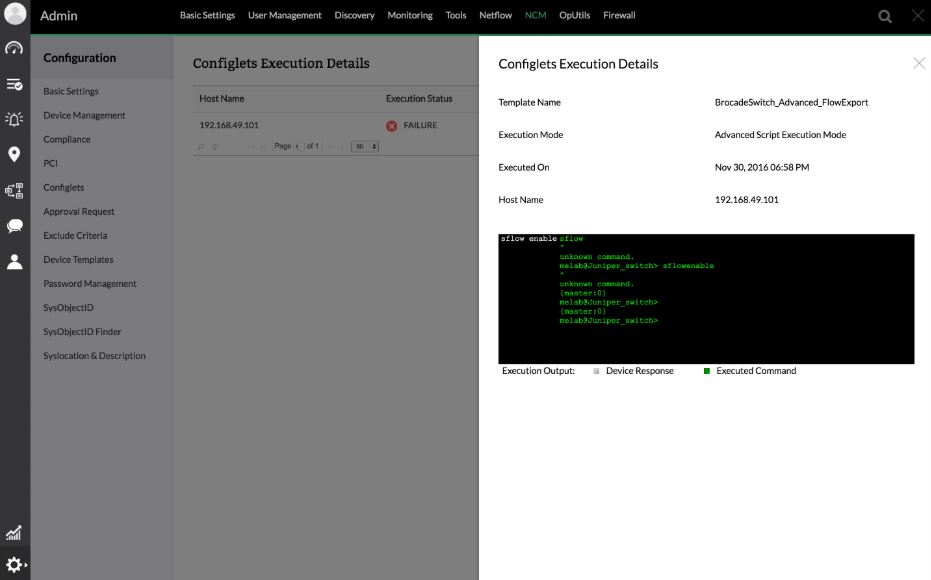 Consider the same export sflow example. We can determine which command should be executed next based on the current response. For example, if the response contains "unknown command" string then we can execute the last command and halt the execution. If there is no error string we can proceed with the next command in sequence. Refer the below configlet.

We can use this configlets workflow for other cases such as checking interface up/down status before configuring, checking number of ips configured for flow export before enabline new etc. Also we can check whether the configuration is properly updated or not after executing a command. If it is not reflected in the configuration we can execute the same loop again to make sure we don't miss the configuration update. Here the sequence number can be in any order. At any point you can stop the execution flow, by giving "end" in the success or failure value. If the success or failure is not defined, then the next command in the order will be executed.