Firewall syslog analysis and other security device log analysis is vital when it comes to network security. Merely deploying multiple network security devices (firewalls, IDS, IPS, proxies, VPNs, and more) in itself will not secure your network. Instead, the security data generated from these tools should be thoroughly analyzed and used to identify anomalies within the data in real time.

The importance of analyzing firewall syslogs.

Firewall syslog analyzer helps reveal information about infiltration attempts at the perimeter of a network, and on the nature of traffic coming in and going out of the firewall; this means security administrators need to monitor these logs in real time so they can swiftly remediate threats once they're identified. Traffic syslog analysis also enables security administrators to plan their bandwidth requirements based on the bandwidth usage across firewalls.

Firewall Analyzer is a firewall syslog analyzer tool. It generates the following reports:

As a security administrator, you can visualize the behavior patterns of the network traffic from these traffic analytics.

Firewall Analyzer is a firewall syslog analysis tool. It enables network administrators to search the raw logs of a firewall to pinpoint the exact log entry that caused the security activity. The advanced search results are based on raw firewall logs and can be converted into report profiles. The advanced search comes in handy during forensic analysis. Archived logs can be imported, and security incident analysis can be carried out by searching the raw logs. 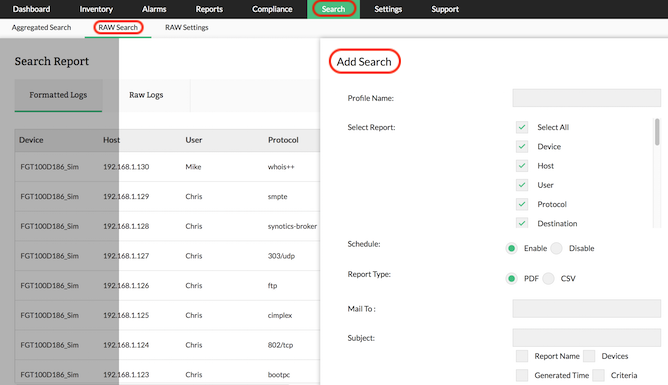 Firewall Analyzer is an effective syslog analysis software that offers many features to help collect, analyze, and report on firewall syslogs. It provides syslog-based reports for most major firewall devices, including Cisco, FortiGate, WatchGuard, and Check Point. Download a free, 30-day trial of Firewall Analyzer, and secure your network now!