Get started for free Schedule a live demo 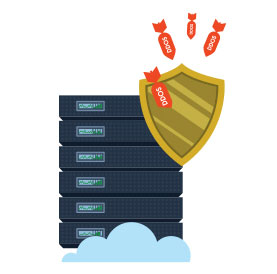 In a network, threats refer to the malicious elements that can affect its smooth functioning.Thus, threat detection is a necessity for any organization wishing to sideline any chances of fiscal losses or decreases in productivity. In order to preempt any such attacks from varied sources, efficient threat detection intelligence is required.

Threat detection can be any technique used to discover the threats to your network or application. The purpose of threat detection is to eliminate threats before they can actually affect their targets.

The path threat actors take to the core of your network

Malware is software that can be hostile and dangerous to computer networks and associated devices. It is often introduced into the system through malicious files from illegitimate websites.

Active Directory is a repository of information about a network. This makes it a target for scammers to gain unauthorized access to the network and then laterally scale to multiple devices linked to the same network. The stages of a cyberattack often follow a similar pattern.

The reconnaissance stage, or preliminary stage, of an attack involves the collection of information about the network and security profile of the target. The information garnered is then used to determine a suitable trajectory to gain access to the potential host network. Port scanning is one of the most widely used techniques for making pathways into the network by understanding its architecture.

Open ports in a network act as a gateway to the applications running on it, as each port has a specific application listening to it. The port scanning process adopted by the hacker aims to establish communication between the hacker and the services running on the port. This step further aids the threat actor in moving laterally deeper into the network. Lateral scaling in networks refers to the gradual gathering of various devices' credentials due to the lack of continuous authentication. This is a problem that exists in traditional networks, where a single security breach can compromise the entire network environment. Lateral scaling is a form of advanced persistent threat that tends to stay in the network undetected for a long period. But what are the implications of this vertical movement?

This is where the actual problem, distributed denial of service, enters the security administrator's long list of dilemmas. When all the ports in a network are used up by illegitimate traffic, the network service is interrupted, and ultimately the network will be deemed unusable. Thus, the vulnerabilities to which the network as an entity is exposed to are manifold.

Vulnerability is a broad term that has many manifestations; however, all forms of vulnerabilities can potentially allow attackers to gain access to your network and exploit its resources. One such form of vulnerability is packet sniffing. In software packet sniffing, the network configuration is altered to promiscuous mode to facilitate the logging of data packets. Once a data packet is accessed, even its header can be changed, leading to huge data loss.

Man-in-the-middle (MITM) attacks are also a threat that can compromise the sensitive data of a user linked to a particular network. In a MITM attack, the attacker intercepts a request put forth by an actual user to avail the services of an actual network. Interception modes can vary, but IP spoofing is the most common method. The IP address of each device interface is unique, and the data transmitted through the network path is associated with an IP packet. The attacker spoofs the header address of the packets and redirects the traffic to the intruder's device, enabling the attacker to steal information. The modus operandi of intrusions may vary but the chances of it crippling the network remain high.

Holistically monitoring and detecting these threats lies outside the scope of scanning tools that enable automatic detection of ports. However, port vulnerabilities are not the sole troublesome threat that need to be managed comprehensively.

Securing the network from threats and vulnerabilities is the primary purpose of any network monitoring tool. But there are a plethora of challenges to accomplishing it, including:

The role of observability in threat detection

Observability purely acts on the telemetry data collected, which includes logs, metrics, and traces. Being the key pillar of observability, logs record key events and help in designing an efficient threat intelligence strategy by using features like network path analysis and root cause analysis. Analyzing the root cause in specific ways allows you to create a collection of information on various anomalies that can negatively affect the system or web application.

The evolution of observability has helped to ease the process of threat detection because it forecasts classified threats with the help of artificial intelligence and machine learning. This enables you to gain deep insights into the actual topology of the network and create a profile that alerts on deviations through logs and reports. Continuous feedback is the concept upon which observability is built, and feedback generated from logs helps in threat detection. Observability should not be overlooked; it's increasingly being used by modern enterprise solutions to provide services to customers, all the while complying with privacy rules and meeting the crucial elements of SLAs.

With observability, all incoming and outgoing data packets are scrutinized against a set of predetermined rules. These rules are a target for hackers since altering them can destroy the functionality of the network applications. A proper firewall analyzer based on observability quickly responds to even minute changes implemented to the firewall under its surveillance.

OpManager Plus: Your pragmatic observability solution

OpManager Plus has adopted observability into its ranks. It has revamped its features to suit the proactive monitoring needs of enterprises in keeping threats at bay, and also derives the full potential of forensic logs in achieving that. OpManager Plus is the perfect solution to keep tabs on network applications by using observability. It is an integrated solution that comprises of server monitoring, application monitoring, bandwidth monitoring, configuration management, firewall security, compliance management, and IP address and switch port management. With OpManger Plus, you can:

Help us serve you!

Contact our support team to learn first hand about the features that can improve the observability of your network.

More on OpManager Plus

Attain pragmatic observability with OpManager Plus. Try it now for free.