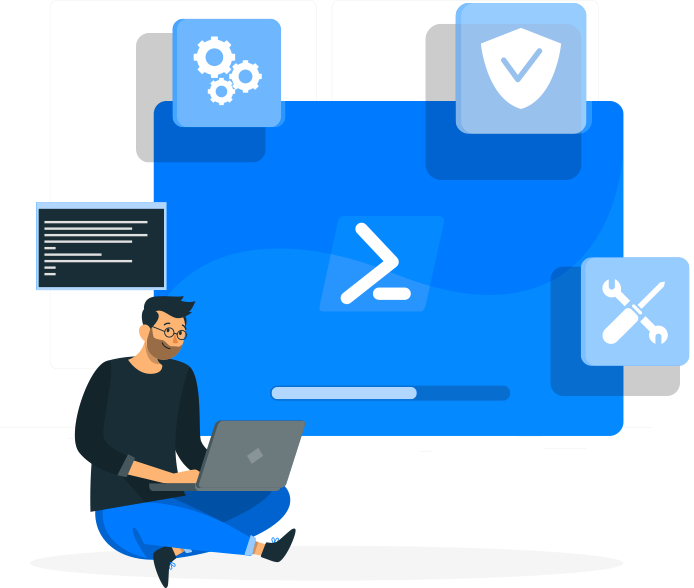 What is Windows PowerShell?

Windows PowerShell is an object-oriented scripting language built over a .NET Framework for use in Windows environments. It is mainly used for performing management and reporting operations, and also automating administration tasks across multiple platforms and applications including the Windows OS. This is a handy PowerShell guide for beginners trying to learn PowerShell.

Did you know? / PowerShell - a quick history

Pre-2002 - Automation and integration scripting tools were pretty much non-existent. IT admins had to use multiple tools and languages, like DOS Shell, VBScript, and Windows Basic scripting to manage their Windows environments.

2002 - Jeffrey Snover publishes the Monad Manifesto, in which he introduces Monad as the "next generation platform for administrative automation".

PowerShell has since been fine-tuned multiple times over almost two decades to its current version, PowerShell 7.0.

How does Windows PowerShell make AD management and reporting easier?

PowerShell adds an element of ease, efficiency and flexibility to the traditional Windows Command Prompt. It is often the tool of choice for integrating administration tasks across different applications in the Windows environment. In fact, it comes bundled with all Windows OS versions released after Windows Server 2008, cutting down the hassle of installing it separately. As it supports .NET objects and can access all .NET libraries, it can also work with scripting languages like C# or Visual Basic, to name a few. This PowerShell tutorial requires little knowledge of programming and is beginner friendly.

How do you launch PowerShell?

The most common question that many PowerShell beginners have is "How to launch PowerShell?" PowerShell comes pre-installed in recent versions of Windows OS. Follow these steps to launch it:

What is Windows PowerShell ISE?

Windows PowerShell ISE is an integrated scripting environment. It is the default editor for PowerShell, and is useful for for running and testing code, and debugging and fixing errors. This host application also contains a list of cmdlets and common modules used by system administrators.

Fun fact: The PowerShell ISE is highly customizable and enables users to pick the color scheme for fonts!

Your download is in progress and it will be completed in just a few seconds!
If you face any issues, download manually here