We've detected that you have an ad-blocker enabled! Please disable it for an original view
Awards
Active Directory Management » Documents » ADManager Plus Awards and Recognitions

ADManager Plus Awards and Recognitions

ManageEngine ADManager Plus holds its head high on being recognized and rewarded some of the most prized certifications and review ratings. Listed below are a few of them:

Windowsecurity.com Readers' Choice 2nd Runner Up in the Group Policy Management category for the year 2014.

ADManager Plus adds yet another feather to its hat with a podium finish as the runners up in the Group Policy Management category in Windowsecurity.com Reader's Choice awards. 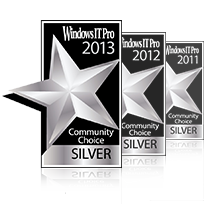 Windows IT Pro Awards 2013: ADManager Plus wins the Community Choice Silver for the third consecutive year.

Yet again, for the third straight year in a row, ADManager Plus gets the thumbs up from our customers and wins the Community Choice silver award in the Best Active Directory / Group Policy Product category

Windowsnetworking.com Readers' Choice Runner Up in the AD Management Category for the years 2013 and 2014.

ADManager Plus adds yet another feather to its hat with a podium finish as the runners up in the Active Directory Management category in WindowsNetworking.com Reader's Choice awards.

Once again, ADManager Plus gets the vote of the expert reviewers and also our customers to bag the silver awards for the Editors' Best as well as the Community Choice in the Best Active Directory/Group Policy Product category, for the second year in a row.

Winning the hearts of the experts and users alike!!

That ADManager Plus has yet again managed to win the hearts of both the experts and users is an ample testimony to ADManager Plus's capability to meet the varied demands of the experts and customers through its world class features & capabilities, simple to use, easy to understand UI, highly useful features that make their everyday tasks simple, easy to manage and execute.

Defending the Active Directory of the Department of Defense

ADManager Plus has been awarded the prized Certificate of Networthiness (CoN) by the Network Enterprise Technology Command (NETCOM) of the United States Army.

The Certificate of Networthiness is the basic qualification for any software to be deployed into the armed forces of the United States. The army has a selection process that is as elaborate and strict as they have it for their personnel. This certificate shows that ADManager Plus meets the highest standards of security, compatibility and sustainability - the 3-word mantra for the US Army's Technical Staff! This also proves ADManager Plus's superiority as an active directory manager in performance. In today's world of networks and servers, security is of utmost importance...and this certification is of great significance in this respect.

In addition to the certification, the fact that ADManager Plus has been adopted by many other Government and Federal agencies, and defense organizations like the Army, Navy, Air Force, Office of the Secretary of Defense and the Department of Defense, is a resounding testimony to ADManager Plus's capability and efficiency in Active Directory management.

ADManager Plus has been conferred a "Three-Diamond" rating by Windows IT Pro Magazine!

Windows IT Pro is a trusted trade publication and website dedicated to reviewing products that run on Windows.

On the issue dated January 25th, 2010, ADManager Plus was reviewed along with three other comparable Active Directory products. Among them, ADManager Plus emerged a clear champion in ease of installing and deployment. Another feature that caught the senses of the reviewer was the comprehensiveness and the range of reports available; especially the reports for compliance to Government Regulatory Acts like SOX and HIPAA.

"There are even compliance-specific reports, including SOX-, HIPPA-, and PCI-compliance reports. Of all the products in this comparative review, ADManager Plus has the most comprehensive list of available reports."

"I was excited to see a particular right: Create Exchange Mailbox. With this right, I was able to create a Help Desk Technician Role that had the correct permissions to create an Exchange mailbox, even though the user wasn't an Exchange administrator."

Last but not the least, the one aspect in which ADManager Plus that undoubtedly hits the pinnacle is the also the one where it hits the abyss - the pricing. Windows IT Pro has recommended ADManager Plus as an economic alternative to expensive Active Directory management software.

A mini Active Directory ticket-management and compliance toolkit right within ADManager Plus! Define a rigid yet flexible constitution for every task in your AD. Tighten the reins of your AD Security.

Get rid of the inactive, obsolete and unwanted objects in your Active Directory to make it more secure and efficient...assisted by ADManager Plus's AD Cleanup capabilities.

A complete automation of AD critical tasks such as user provisioning, inactive-user clean up etc. Also lets you sequence and execute follow-up tasks and blends with workflow to offer a brilliant controlled-automation.

ADManager Plus Trusted By