Today's employees have become highly mobile—they work from home, in transit, or while they travel around the globe. Organizations sometimes even employ temporary employees, such as contract employees, who only work remotely. All these people have to connect securely to their organization's networks using VPNs, meaning it's important to monitor accesses to these VPNs to ensure only authorized people are logging in to the network. EventLog Analyzer is the ideal tool to help you achieve this.

EventLog Analyzer automatically collects logs from VPN devices and generates out-of-the-box reports and alerts for Cisco ASA, SonicWall, Fortinet, Huawei, Sophos and Meraki devices. This solution serves as a VPN log analyzer as the reports help you review VPN user details, audit VPN logins, and analyze trends in login patterns. You can customize reports by applying filters and drill down to raw log information straight from the reports. You can also export or schedule reports as per your convenience, and set up email and SMS alerts as required.

Location based VPN logon monitoring: Create custom alert profiles to get notified on VPN logons based on locations. Add the Blacklisted Source Location criteria and select locations of your choice. 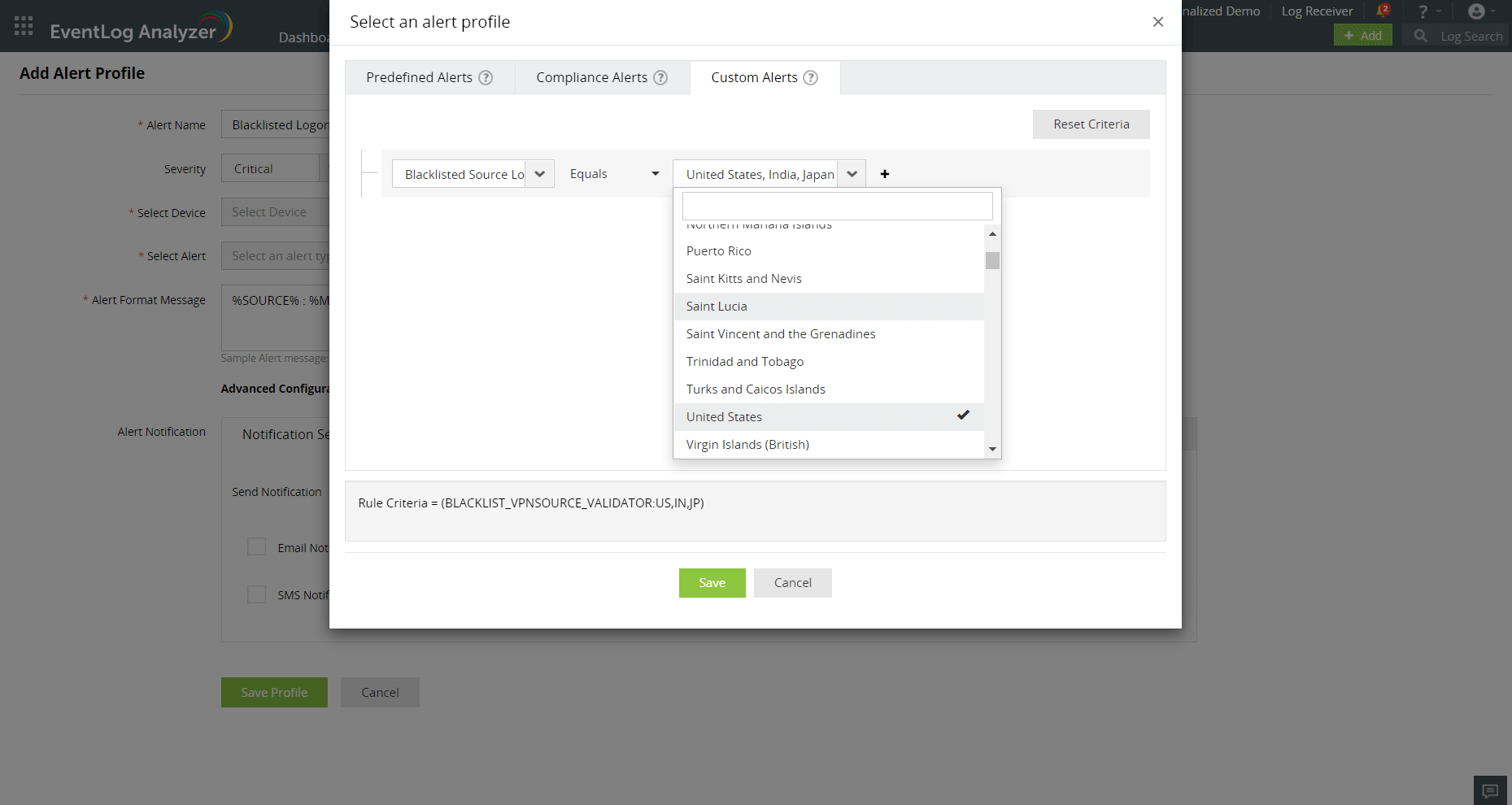 With EventLog Analyzer's out-of-the-box VPN reports, you can get insights into:

EventLog Analyzer keeps track of VPN connections established within your network. Using its out-of-the-box reports, you can view details on private IPs that get allocated most frequently, users who often use VPNs to get private IPs, remote IPs that often access the network, and much more. These reports help spot network anomalies related to VPNs and users gaining access to the network through them.

Fortinet VPN reports provide information on successful and failed VPN logins. The top reports sort logins by device used and VPN user so you can identify the users and devices that most frequently connect to your organization's VPN. The trend reports are useful in studying Fortinet VPN login patterns.

EventLog Analyzer's prebuilt reports for Meraki VPN provide comprehensive information on the most important aspect of VPNs–logons. There are exclusive reports for successful logons categorized based on devices and users. The trend report helps you understand the VPN logon trends in your network.

Bolster security by monitoring all your VPN logs.

Your download is in progress and it will be completed in just a few seconds!
If you face any issues, download manually here