Back to Data Breach

Thousands of Disney Plus user credentials hacked and sold online.

On November 12, 2019, Disney Plus, a highly anticipated streaming service, was launched. However, within few hours of its release, cyberattackers hacked the accounts of users and locked them out, leaving them with no access to the accounts. According to an investigation conducted by ZDNet, the account credentials are available on several dark web forums for as little as $3 to $11 per user.

In the first 24 hours of its launch in the US, Canada, and the Netherlands, the customer base rose to 10 million subscribers. Unfortunately, the servers crashed on the day of its release, with some of its subscribers complaining that they were unable to stream their favorite shows and movies, and some of them were unable to access their accounts altogether. 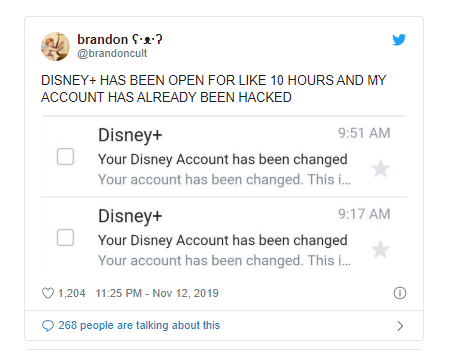 Some of the affected users claimed that they have reused their passwords, so it’s likely that the account credentials were obtained from a credential stuffing attack. But many other affected users reported that they had used unique passwords. Like most streaming services, Disney Plus allows password sharing, meaning an account can be accessed from different devices in different locations. Disney Plus also doesn't have multi-factor authentication, which could have prevented the breach to an extent.

Disney responded to the incident saying, “We have seen a very small percentage of users in this situation and encourage any users who are having these kind of issues to reach out to our customer support so we can help them.

Don’t want to make the headlines for the wrong reasons? It's important to invest in a tool that will protect your network from brute-force attacks, ransomware threats, and denial-of-service (DoS) attacks. Download ManageEngine Log360, a tool that helps combat both internal and external security attacks.

How ManageEngine can help.