In a network infrastructure, devices use several protocols to communicate and transfer data. SNMP is one such protocol that aids in network monitoring and management. The earlier versions of the protocol—SNMPv1 and SNMPv2—had security vulnerabilities that led to attacks and data breaches. In fact, some organizations have set standards that prevent the usage of SNMPv1 and SNMPv2 entirely.

In order to protect sensitive data, SNMPv3 configuration should be enabled. In a network that houses several devices, manually enabling SNMPv3 in every device would be time-consuming. However, with Network Configuration Manager you can easily automate the process of enabling SNMP v3 configuration in all your network devices.

Compared to its predecessor, SNMPv2 has enhanced features, like part-based security, but SNMPv3 goes even a step further with more sophisticated security thanks to its cryptographic technology. The advantages of SNMPv3 over SNMPv2 are:

Configure SNMPv3 manually with the help of a terminal emulator like PuTTY. Each device has to be configured individually while using PuTTY. In a network that has several network devices, configuring SNMP v3 in each of them would be time-consuming. With a tool like Network Configuration Manager, such network operations can be automated with high precision.

SNMPv3 configuration is used to transfer network health data between devices. Because it's more secure than previous versions, it's important to configure all the devices in your network to communicate using SNMPv3. Below is an example of enabling or configurating SNMPv3 in an HP switch using PuTTY 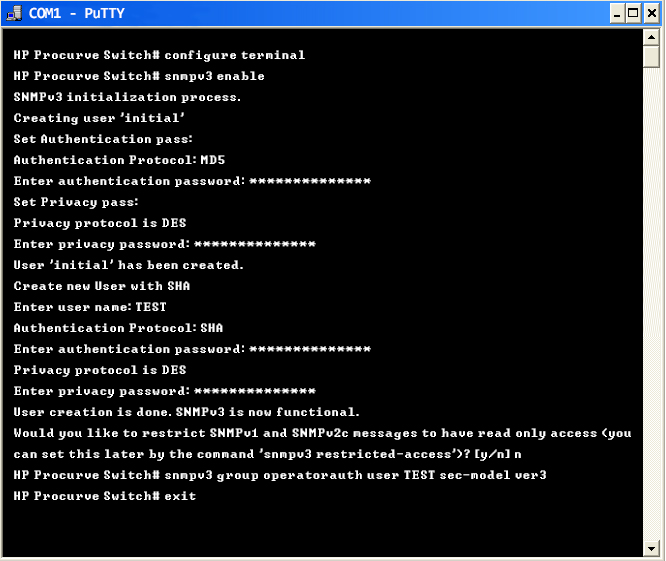 Configlets are executable configuration templates that help you automate repetitive and complex network operations. You can easily set up SNMPv3 in your network devices with the help of configlets in Network Configuration Manager. You can create configlets to suit your device and network requirements. Shown below is an example of configuring SNMPv3 in an HP switch using Configlets.