Network protocols are a set of rules, conventions, and data structures that dictate how devices exchange data across networks. In other words, network protocols can be equated to languages that two devices must understand for seamless communication of information, regardless of their infrastructure and design disparities.

To understand the nuances of network protocols , it's imperative to know about the Open Systems Interconnection (OSI) model first. Considered the primary architectural model for internet working communications, the majority of network protocols used today are structurally based on the OSI model.

The OSI model splits the communication process between two network devices into 7 layers. A task or group of tasks is assigned to each of these 7 layers. All the layers are self-contained, and the tasks assigned to them can be executed independently.

To put this into context, here is a representation of the communication process between two network devices following the OSI model: 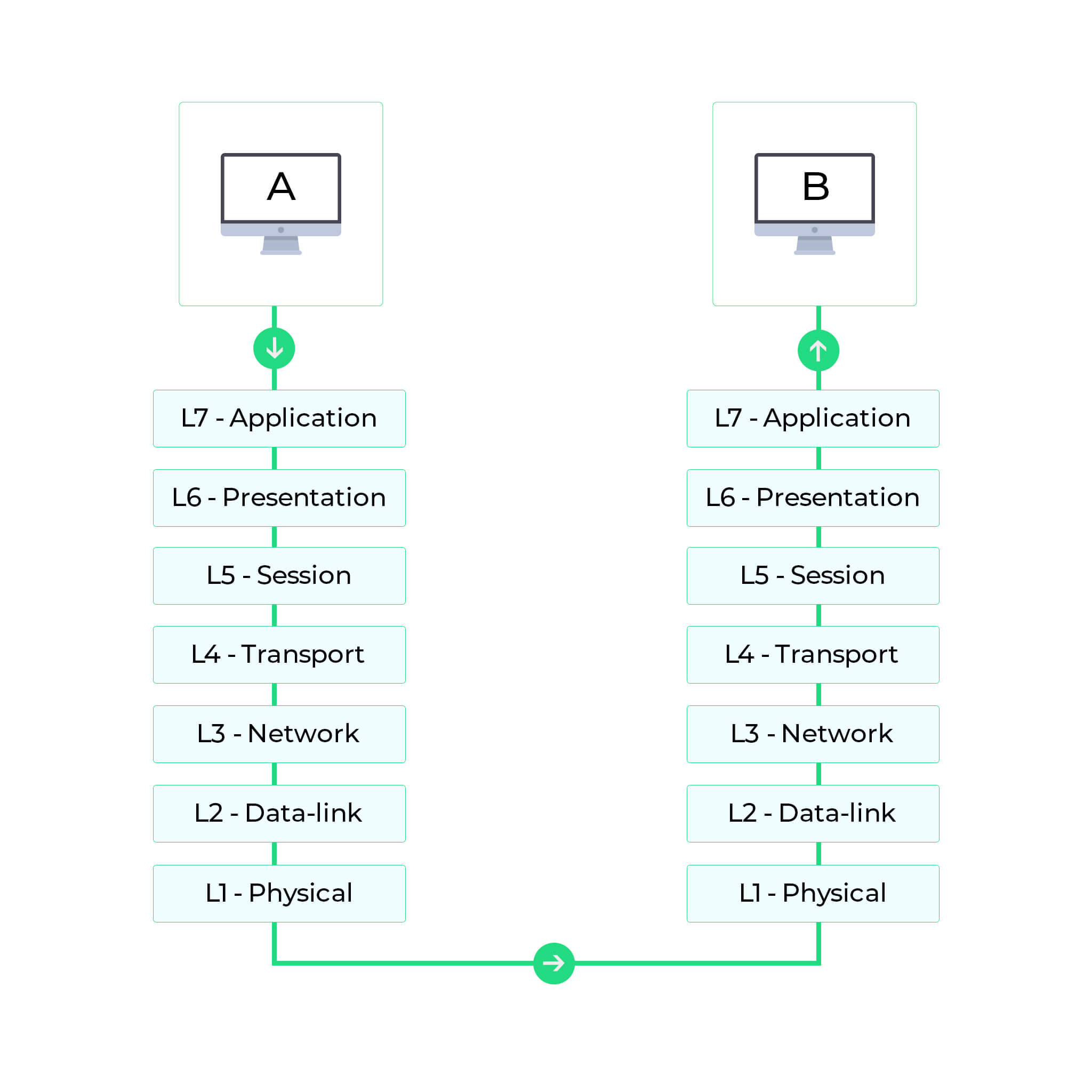 Following are the detailed descriptions of the functioning of network protocols in each layer of the OSI model:

Though some say the OSI model is now redundant and less significant than the Transmission Control Protocol (TCP)/IP network model, there are still references to the OSI model even today as the model's structure helps to frame discussions of protocols and contrast various technologies.

Now that you know how the OSI model works, you can dive straight into the classification of protocols. The following are some of the most prominent protocols used in network communication.

DHCP is a communication protocol that enables network administrators to automate the assignment of IP addresses in a network. In an IP network, every device connecting to the internet requires a unique IP. DHCP lets network admins distribute IP addresses from a central point and automatically send a new IP address when a device is plugged in from a different place in the network. DHCP works on a client-server model.

The DNS protocol helps in translating or mapping host names to IP addresses. DNS works on a client-server model, and uses a distributed database over a hierarchy of name servers.

Hosts are identified based on their IP addresses, but memorizing an IP address is difficult due to its complexity. IPs are also dynamic, making it all the more necessary to map domain names to IP addresses. DNS helps resolve this issue by converting the domain names of websites into numerical IP addresses.

HTTP is an application layer protocol used for distributed, collaborative, and hypermedia information systems. It works on a client-server model, where the web browser acts as the client. Data such as text, images, and other multimedia files are shared over the World Wide Web using HTTP. As a request and response type protocol, the client sends a request to the server, which is then processed by the server before sending a response back to the client.

IMAP is an email protocol that lets end users access and manipulate messages stored on a mail server from their email client as if they were present locally on their remote device. IMAP follows a client-server model, and lets multiple clients access messages on a common mail server concurrently. IMAP includes operations for creating, deleting, and renaming mailboxes; checking for new messages; permanently removing messages; setting and removing flags; and much more. The current version of IMAP is version 4 revision 1.

The Post Office Protocol is also an email protocol. Using this protocol, the end user can download emails from the mail server to their own email client. Once the emails are downloaded locally, they can be read without an internet connection. Also, once the emails are moved locally, they get deleted from the mail server, freeing up space. POP3 is not designed to perform extensive manipulations with the messages on the mail server, unlike IMAP4. POP3 is the latest version of the Post Office Protocol.

SMTP is a protocol designed to transfer electronic mail reliably and efficiently. SMTP is a push protocol and is used to send the email, whereas POP and IMAP are used to retrieve emails on the end user's side. SMTP transfers emails between systems, and notifies on incoming emails. Using SMTP, a client can transfer an email to another client on the same network or another network through a relay or gateway access available to both networks.

Telnet is an application layer protocol that enables a user to communicate with a remote device. A Telnet client is installed on the user's machine, which accesses the command line interface of another remote machine that runs a Telnet server program.

The SNMP agent resides on the managed device. The agent is a software module that has local knowledge of management information, and translates that information into a form compatible with the SNMP manager. The SNMP manager presents the data obtained from the SNMP agent, helping network admins manage nodes effectively.

Currently, there are three versions of SNMP: SNMP v1, SNMP v2, and SNMP v3. Both versions 1 and 2 have many features in common, but SNMP v2 offers enhancements such as additional protocol operations. SNMP version 3 (SNMP v3) adds security and remote configuration capabilities to the previous versions.

RPC is a protocol for requesting a service from a program in a remote computer through a network, and can be used without having to understand the underlying network technologies. RPC uses TCP or UDP for carrying the messages between communicating programs. RPC also works on client-server model. The requesting program is the client, and the service providing program is the server.

TCP is a transport layer protocol that provides a reliable stream delivery and virtual connection service to applications through the use of sequenced acknowledgement. TCP is a connection-oriented protocol, as it requires a connection to be established between applications before data transfer. Through flow control and acknowledgement of data, TCP provides extensive error checking. TCP ensures sequencing of data, meaning the data packets arrive in order at the receiving end. Retransmission of lost data packets is also feasible with TCP.

UDP is a connection-less transport layer protocol that provides a simple but unreliable message service. Unlike TCP, UDP adds no reliability, flow control, or error recovery functions. UDP is useful in situations where the reliability mechanisms of TCP are not necessary. Retransmission of lost data packets isn't possible with UDP.

IPv4 is a network layer protocol that contains addressing and control information, which helps packets be routed in a network. IP works in tandem with TCP to deliver data packets across the network. Under IP, each host is assigned a 32-bit address comprised of two major parts: the network number and host number. The network number identifies a network and is assigned by the internet, while the host number identifies a host on the network and is assigned by a network admin. The IP is only responsible for delivering the packets, and TCP helps puts them back in the right order.

IPv6 is the latest version of the Internet Protocol, a network layer protocol that possesses addressing and control information for enabling packets to be routed in the network. IPv6 was created to deal with IPv4 exhaustion. It increases the IP address size from 32 bits to 128 bits to support more levels of addressing.

ICMP is a network layer supporting protocol used by network devices to send error messages and operational information. ICMP messages delivered in IP packets are used for out-of-band messages related to network operation or misoperation. ICMP is used to announce network errors, congestion, and timeouts, as well assist in troubleshooting.

The Address Resolution Protocol helps map IP addresses to physical machine addresses (or a MAC address for Ethernet) recognized in the local network. A table called an ARP cache is used to maintain a correlation between each IP address and its corresponding MAC address. ARP offers the rules to make these correlations, and helps convert addresses in both directions.

SLIP is used for point-to-point serial connections using TCP/IP. SLIP is used on dedicated serial links, and sometimes for dial-up purposes. SLIP is useful for allowing mixes of hosts and routers to communicate with one another; for example, host-host, host-router, and router-router are all common SLIP network configurations. SLIP is merely a packet framing protocol: It defines a sequence of characters that frame IP packets on a serial line. It does not provide addressing, packet type identification, error detection or correction, or compression mechanisms.

Have trouble managing your network?

ManageEngine OpManager is a comprehensive network monitoring tool that monitors the health, performance, and availability of all network devices in an IP network, right out of the box. OpManager utilizes most of the protocols listed above to operate, enabling you to have complete control over your network devices. To learn more about OpManager, register for a free demo or download a free trial.