Routers play an important role in enabling uninterrupted network communication and connectivity. A constantly available router with the desired functioning ensures good performance for its associated sub-networks. With networks relying heavily on your routers' performance, it is important to ensure your routers do not run into any issues. One serious networking issue that routers encounter is route flapping.

On this page, we will take a look at:

What is route flapping?

Route flapping is a networking issue where the state of a router constantly fluctuates within a short period of time. This includes scenarios where the routers:

Route flapping is common in large networks with hundreds of routers deployed across distributed locations. Route flapping can be caused by several networking scenarios that interfere with the ideal working conditions of the router. Some common causes include:

How does route flapping affect your network?

A problematic router can easily slow down your network traffic, disrupt normal network functioning, and impact the end-user experience. Some of the major effects of route flapping on your network include:

How to control route flapping

Best practices such as regularly upgrading your routers help you avoid most router issues. For instance, modern routers with very high processing power limit the possibility of route flapping. However, to ensure your network routers are well-insulated from the cascading effects of route flapping, you should implement the following control techniques:

Route summarization is an effective countermeasure against the risks of route flapping. This technique helps network admins effectively insulate other upstream routers from the effects of a flapping router.

How does route summarization work?

Route summarization works by first taking note of all the links of the sub-networks associated with a router. The links are aggregated based on the common bits in the link address. The router then advertises this aggregate link as the link for all the sub-networks associated with it. This, when done for multiple routers, drastically reduces the number of links advertised in the network.

For instance, let us assume five routers are connected as shown below. Router D will usually have to advertise 16 routes to router E. However, after route aggregation, routers A, B, and C will each advertise only one link to router D by aggregating their links based on the common prefix. Router D will then aggregate these three links based on their common prefix and advertise only one route to router E. This greatly improves efficiency and router performance. 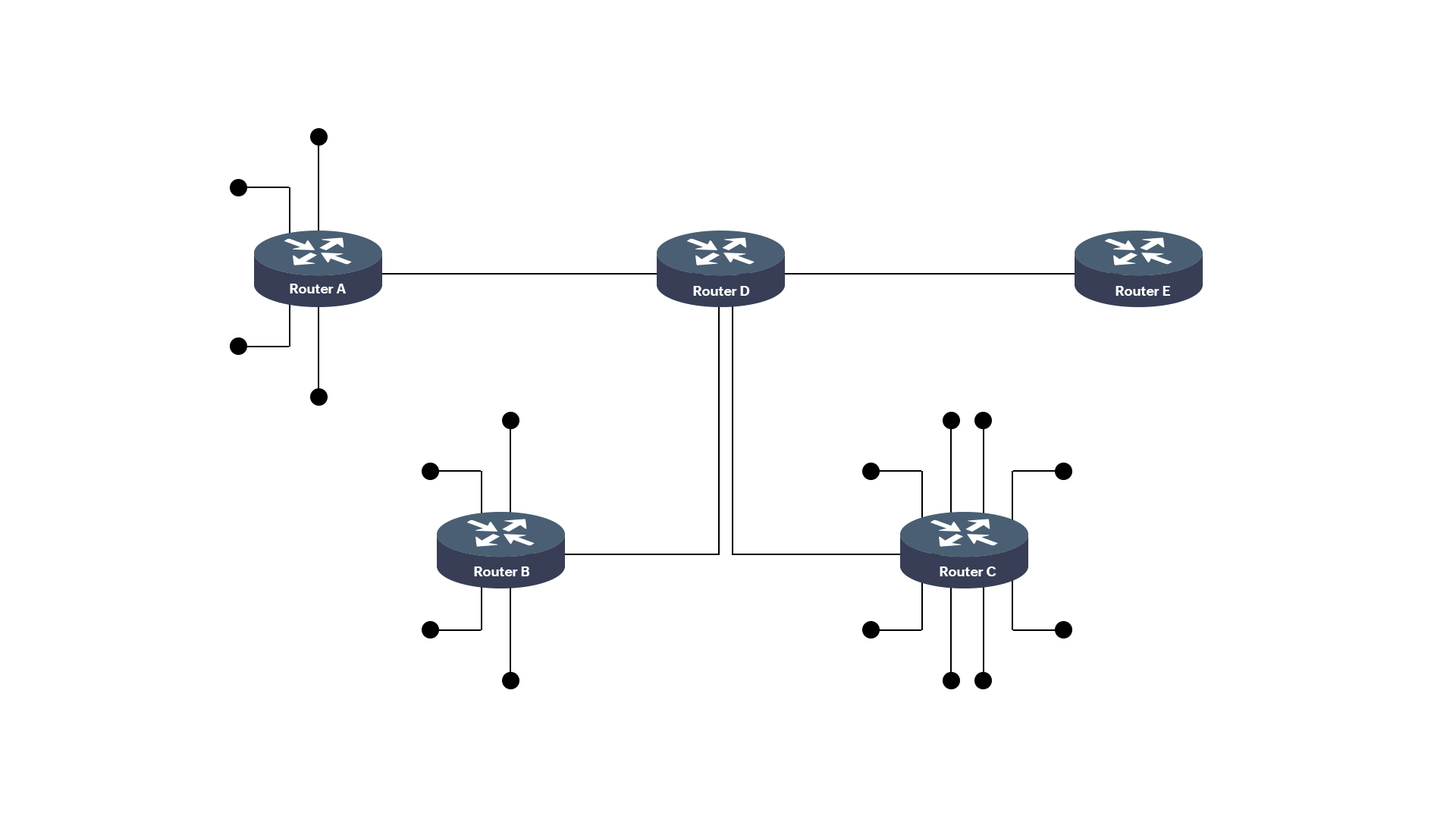 This eliminates the need to update, recalculate, and withdraw destination routes frequently and thus isolates the effects of route flapping from other routers and helps network admins easily troubleshoot the issue.

Route flap dampening is a technique that enables network administrators to stabilize the network routes in case a router flaps. This technique works by suppressing the flapping router and rerouting the traffic passing through it.

How does route dampening work?

First, network routers are configured to adhere to the implemented route dampening technique. To enable dampening, network admins need to define a suppress limit. This is the preferred number of times a router is allowed to flap. In the network, for every flap, the router is given a penalty. When the cumulative penalty becomes greater than the suppress limit, the router is suppressed. Traffic is rerouted through more stable routers.

However, the penalty a router has accumulated exponentially decays over time. When the cumulative penalty is less than the suppress limit, dampening is disabled by default, and the route is reused. Thus, route dampening helps network admins delay the use of unstable routes before they are stabilized.

Note: While route flap dampening might work well in tackling the flapping routers in private links, relying on it for your entire network is not advisable. Misconfigured route dampening metrics can easily cause parts of the network to be unreachable or even cause other routers to flap. Network admins need to carefully analyze the needs and configurations of their networks before implementing route dampening.

Routers, as the critical components of your IT infrastructure, are prone to many other networking issues, such as slowdowns and low signal quality. These issues severely impact your network performance and availability. To safeguard your network against the impact of problematic routers and to enhance router performance, you need a reliable network performance monitoring solution in place.

Keep a close watch on your network routers with OpManager

In addition to monitoring routers, OpManager is capable of doing so much more!

Discover the full potential of OpManager today by downloading a free, 30-day trial or scheduling a live demo with our product experts!