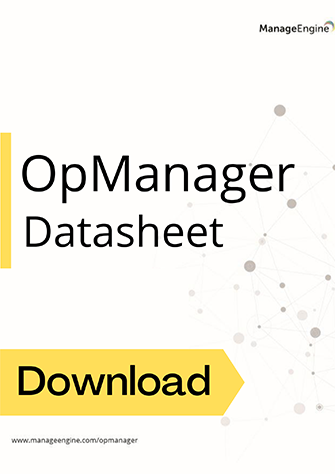 Learn more about OpManager's features & functions Network topology, or network architecture, refers to the layout or organization of a network. Mapping and understanding the network topography is a critical part of network administration, monitoring, and management. It can help network administrators in the following ways:

The network diagramming tool offered by OpManager helps large and enterprise level businesses simplify their network management process by visualizing the network in real time with the help of powerful network diagram tools.

ManageEngine OpManager is robust, real-time network topology tool with topography mapping capabilities trusted by more than one million network administrators across the globe. Its most prominent network topology features include:

OpManager leverages Layer2 Maps to act as a network topology mapping software that helps you to understand the topology organization of your Layer 2 networks by providing a real-time perspective of their interconnectivity. Layer2 Maps' powerful capabilities include the following:

OpManager's Business Views is a powerful topology visualization feature that enables network administrators to easily categorize, visualize, and manage devices based on business needs; understand the larger impact whenever devices run into downtime; and isolate, prioritize, and troubleshoot faults based on business criticality of the devices affected.With Business Views, network administrators can view the real-time status of a device and its interfaces that are connected to the other devices, and also set custom backgrounds for different views.

An additional capability enables network admins to place Business views within Business Views. With this advanced feature, they can gain a more detailed view of the network topography, and understand why a network device in a custom topography runs into issues.

Why is mapping network topology important ?