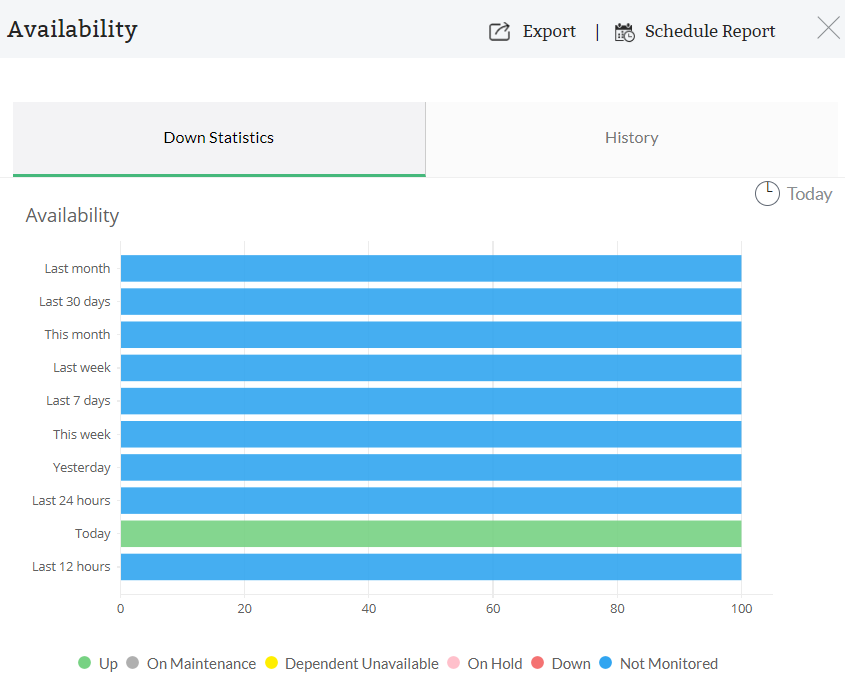 The performance and capacity of your wireless networks depends on its signal strength. Factors such as the coverage area of the access point, the number of clients (network users), and network noise can impact the signal strength. A weak network can result in a slow connection and sometimes even in termination of connectivity.

OpManager's WiFi monitor enables you to effectively monitor the signal strength of your wireless networks. Usually, the signal strength within your network coverage area is above the minimum required value. However, your user can be closer to the wireless access point and still experience weak signal or issues with connecting to your network. This can be due to:

To tackle such issues, OpManager offers a set of proactive wireless monitors including monitors for tracking client count, signal to noise ratio, and transmitted bytes in the managed access points. By setting up various monitors to track network metrics and minimizing the deterioration of signal strength, network admins can guarantee strong signals for stable connectivity.

Users complaining about slow download speeds, poor signal, and loss of network connectivity are common issues faced in wireless networking. The usual suspect in these scenarios is packet loss. Poor network performance, network congestion, and low bandwidth can trigger network packet loss which results in network packets from the source being dropped before reaching the destination. This can affect the overall health of your network as it negatively impacts the connection between your network access points and users.

OpManager's wireless monitor software displays the packet loss by pinging the managed wireless components, such as access points and wireless LAN controllers (WLCs), using the Internet Control Message Protocol (ICMP). This involves sending one ping per second between hosts and counting how many times the request is lost. With accurate measurements of packet loss, presented in both real time and historical metrics, OpManager's wireless monitoring tools help end users ensure their networks are performing up to expectations.

Response time is the time taken for the transfer of data from one point to another in a network. A higher response time (usually more than 100 ms) can indicate a lag in the network service or a higher latency. This can cause poor network performance. When it comes to wireless networks, data transfers can face transmission and processing hurdles such as other wireless interferences and switching access points which, in turn, increases the response time.

OpManager's wireless monitor helps you remediate these issues and enables you to improve the responsiveness of your networks. This wireless monitor tracks and displays the response time of wireless components, such as WLCs, in real time. The response time metrics, along with OpManager's built-in trace route tool, can help you diagnose transmission and processing delays in sending packets from source to destination in your network.

Commonly caused by factors such as network congestion, collisions, and route changes, network jitter is an indicator of intermittent delays in the network's data transfer.

With the shift towards wireless networking, several concepts, including Voice over IP protocols (VoIP), have evolved to support both wired and wireless networking infrastructures. However, when compared to the wired networks, issues such as radio frequency interference and increased jitter can easily deteriorate your network performance.

Using OpManager, you can monitor jitter from source to destination, or destination to source, in real time and set up thresholds for acceptable levels of network jitter. This wireless monitor can trigger instantaneous threshold-based alerts that can help network admins to effectively diagnose causes and troubleshoot network issues causing jitter.

During network discovery, OpManager automatically discovers wireless components, and groups the discovered components as devices, interfaces, WLCs, and access points so they can be monitored from a single pane of glass. This wireless monitoring solution provides a centralized console that helps you:

Schedule a personalized free demo with our product expert or download a 30-day free trial and discover hands on how OpManager enhances network performance monitoring.