What is intent-based networking (IBN)?

Intent-based networking is networking technology that configures the IT infrastructure based on a business intent — a service request from the network administrator without any human intervention. It continuously provides critical network insights and constantly tweaks the hardware configuration to ensure the intent is met. It takes networking from a device-centric to a business-centric model.

Intent-based networking (IBN) leverages the analytics of machine learning (ML) with the power of IT automation to enhance the agility of the IT infrastructure in every possible aspect. In simple terms, IBNS is a self-driving networking system.

How does an intent based networking software (IBNS) work?

Let's consider an educational institution that offers off-campus learning courses to its students. The institute broadcasts a lecture for a specific course from 10am to 11:30am on the third Wednesday of every month. For the lecture to broadcast without intermittent issues, the organization must do two things during the lecture:

The IBNS breaks down the service request into actionable tasks: 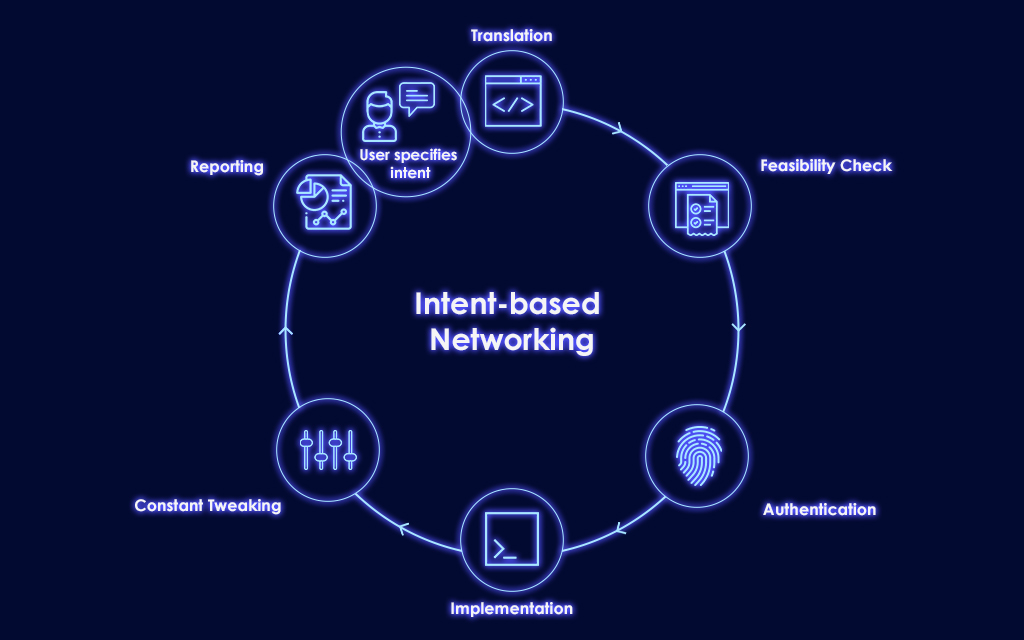 The IBNS comes in handy for the network administrators when dozens of service requests have to be handled. The above mentioned example covers only some of the capabilities of the IBNS.

The idea behind intent based network management has been around for years just as SDN. Though the two technologies graze one another in numerous aspects, they differ by their fundamental ideas.

A software-defined network (SDN) is an IT infrastructure in which all hardware is configured by a central software console. An SDN aims at controlling the IT infrastructure with the help of software applications but an SDN operates on a device-centric model such as exporting flow data from a specific interface.

The goal of IBN is to create an autonomous network. IBN needs only the business intent. So it can frame and enforce policies, configure the network accordingly, and constantly check and tweak the network performance. Leveraging the cognition of machine learning with network orchestration is IBN's unique selling proposition (USP). Above all, IBN operates on a business-centric model.

SDN primarily works on how a device should operate. On the other hand, IBN works on how to achieve the service request — intent by automatically identifying resources and configuring them.

What are the challenges with the IBNS?

Since the IBNS is not a proven technology, there are a lot of challenges that might be encountered when employing it. Some of them are:

Why is intent based networking (IBN) needed?

The IBNS has a lot to offer organizations, including:

Managing hardware in the thousands with network automation can drastically reduce the mean time to repair (MTTR). It makes the IT infrastructures flexible, helping IT administrators handle complex service requests with fewer resources.

The IBNS saves time and resources for businesses, which are important factors for all enterprise-grade organizations to consider.

How can you make your IT infrastructure more agile?

The IBNS is not mainstream as of 2020. It is still in its early stages of development. However, you can make your IT infrastructure more agile starting today with ManageEngine OpManager.

ManageEngine OpManager is a comprehensive network monitoring system that proactively monitors servers, switches, routers, firewalls, and anything that has an IP and is connected to the network. Gain 360° network visibility with complete

OpManager's code-free workflow automation feature helps in efficiently managing your IT infrastructure, making it more flexible to service requests. With the Network Configuration Manager add-on, the above discussed example can be executed in OpManager with a drag-and-drop workflow builder.

You can push and revert configurations without any user intervention on a regular basis with ManageEngine OpManager!

Email and #slack notifications can both be added.

You can try OpManager completely free with a 30 day trial and manage your IT infrastructure efficiently starting today!