What is a CPU Temp Monitor?

The primary performance metrics of a server can be grouped together into four broad categories:

Most vendors monitor these metrics using Simple Network Management Protocol (SNMP), while Windows Management Instrumentation (WMI) and command-line interfaces (CLIs) are also widely used. All of these performance metrics are important in their own way, and most network monitoring solutions monitor them.

Why do I have to monitor my CPU temperature?

Your processor (or CPU) has at least one core, maybe more depending on the make and model. Each of these cores are processing information at different speeds, known technically as the clock rate, and are thereby generating heat constantly. Most processors have a temperature range for safe operation, and it is essential to maintain them within this range for optimal performance and to prevent damage to them.

Nowadays, hardware manufacturers implement fail-safe mechanisms into processors themselves. In case the CPU temperature goes beyond the prescribed limits, the processor is "throttled" by:

In any of these cases, the CPU will start to experience a drop in performance, which results in the system/server experiencing lag or becoming unresponsive. In the worst case scenario, the server might crash, costing the organization quite a lot of time and resources to bring the network back to its normal state.

Even though precautionary measures can be taken to avert these kind of incidents, they are easily as demanding as getting your network back on its feet after a server crash. In enterprise networks, information is processed in the range of several thousand bytes per second, but that level of processing power generates large amounts of heat.

Processors often generate temperatures so high that internal cooling methods are ineffective, and they require special temperature-controlled environments with dedicated HVAC systems to help keep processor temperature in check. Heat dissipated from the servers is calculated in terms of BTUs/hour (British Thermal Units per hour), and air conditioning requirements are calculated based on several factors such as:

As most of us already know, air conditioning isn't cheap; running the air 24x7 to keep your processors from overheating will inevitably increase operational costs, in turn affecting the overall growth of the organization. All of this can be avoided, however, if the temperatures in the network devices are constantly monitored and kept in check. This is where a CPU temperature monitoring software would come into play.

How to monitor CPU temperature easily and effectively?

There are numerous CPU temperature monitoring tools for desktops and network devices in a small scale, but for enterprise-level monitoring, many organizations resort to using a handful of tools, each serving its own purpose. However, this also means the techs using them have to constantly keep switching between them; adding to this, they may also have to frequently update old devices or enroll new devices in these tools as the network expands.

This is where a unified network monitoring solution like OpManager would prove useful. Apart from enabling users to monitor various performance metrics of your devices using SNMP/WMI/CLI, OpManager also provides support for CPU temperature monitor, displaying all available temperature data from your network devices. Along with this, it can also display an array of important hardware metrics such as fan speed, memory utilization, clock speed of the processor(s), and other chassis-related info (in case of a server), thus acting as an all-in-one CPU temperature monitor software.

If you don't find your device listed in the supported devices, don't worry! You can still monitor the temperature for that device using a device Object Identifier (OID); with this, you can create a custom SNMP monitor for that device. You can even set thresholds to receive notifications when the metric goes above or drops below the set values, so that you always know the temperature of your network devices. Just set your thresholds, configure your alarms, and sit back; OpManager's CPU temperature monitoring module will alert you about any threshold violations through the medium of your choice (email, SMS, or web alarms), so that you're informed about a potential issue as soon as the situation arises.

You can also use the hardware health report to get a quick view of the overall status of your devices' metrics, and you can even export them in PDF/Excel format and send them to your email address. From a single pane, you can see all the critical hardware data, monitor CPU temperature and easily monitor the overall health of your devices. What's more? You can also monitor CPU temp and other crucial metrics on the go with OpManager's advanced network monitoring application available on both Android and iOS devices. A real time CPU temperature monitor, on-the-go! 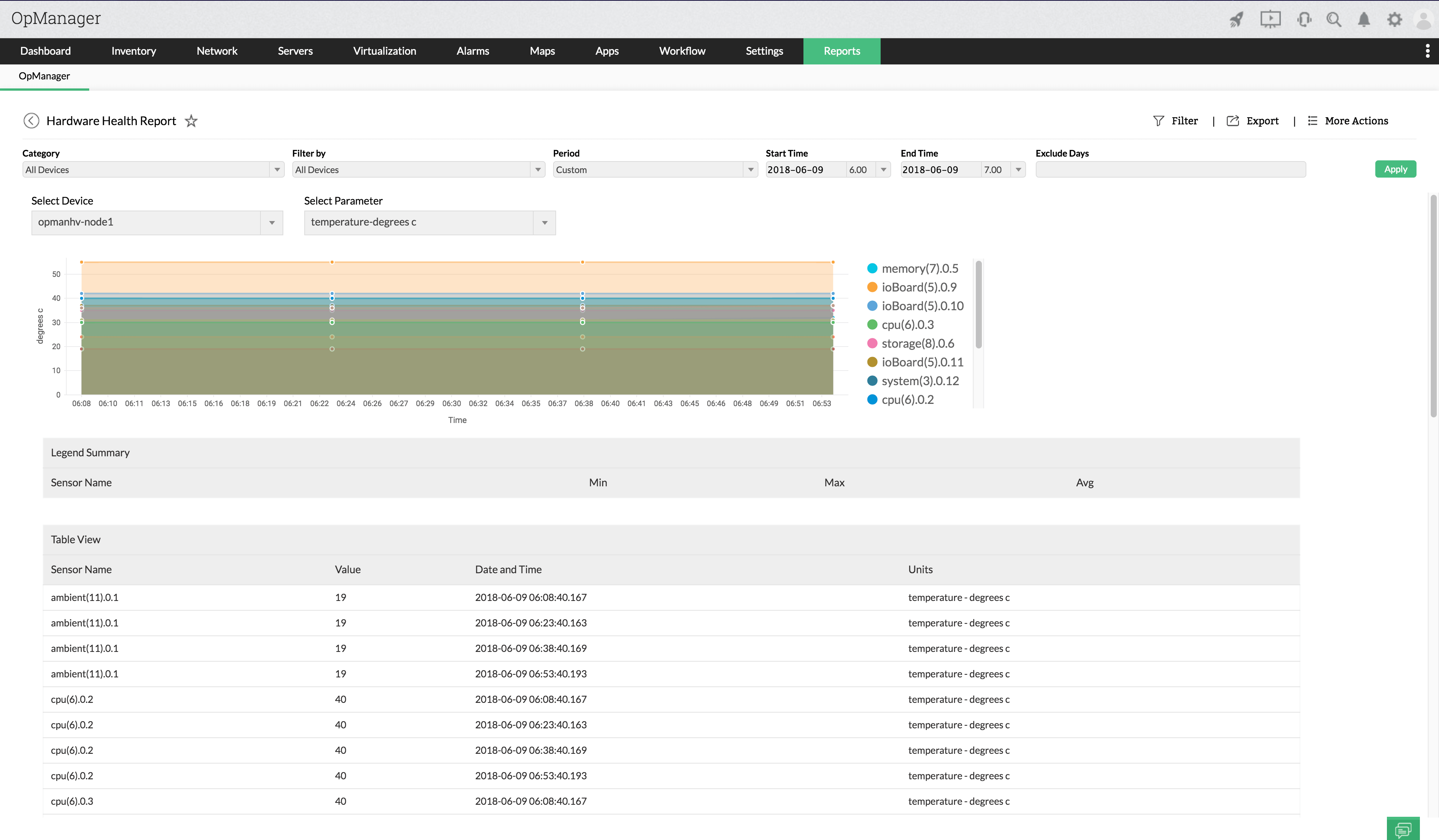