Apache Kafka is an open-source, fault-tolerant distributed event streaming platform developed by LinkedIn. A distributed log service, Kafka is often used in place of traditional message brokers due to its higher throughput, scalability, reliability, and replication. Since Kafka is a distributed system, topics are partitioned and replicated across multiple nodes.

Over the years, Kafka has grown considerably in terms of both volume and complexity, and being a crucial component in the IT infrastructure, it's necessary to implement a dedicated kafka monitor to track its operations and performance. Kafka monitoring tools like Applications Manager's Kafka monitoring tool collects all performance metrics that can help when troubleshooting Kafka issues, and it shows you which ones require corrective action.

Important Kafka performance metrics to look for while performing Kafka monitoring include:

With Applications Manager's Kafka monitoring feature, you can automatically discover and monitor Kafka servers and track resource utilization details, such as memory, CPU, and disk growth, over time; this will ensure that you don't run out of resources. Applications Manager Kafka monitoring software will help you make sure your Kafka server is continuously operating as expected with alerts which are sent out whenever there are sudden surges in resource consumption or unusual patterns. 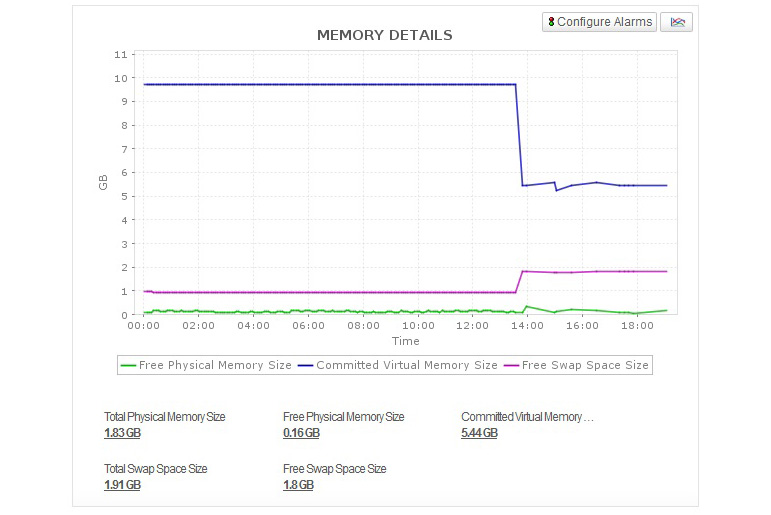 Because it runs in the Java Virtual Machine (JVM), Kafka relies on Java garbage collection processes to free up memory. The more activity in your Kafka cluster, the more often the garbage collection will run. With Applications Manager's Kafka monitoring tool, it's easy to track JVM heap sizes and ensure that started threads don't overload the server's memory. Applications Manager Kafka performance monitor also enables you to track thread usage with metrics like daemon, peak, and live thread count to prevent performance bottlenecks in your system.

In a Kafka cluster, the broker that serves as the controller manages the states of partitions and replicas, in addition to performing administrative tasks like reassigning partitions. With Applications Manager's Kafka monitoring software, you can monitor active controllers to see which broker was the controller when an issue occurred, as well as what the offline partitions count was at the time. You can also monitor the broker's log flush latency; the longer it takes to flush logs to a disk, the more the pipeline backs up. Applications Manager Kafka monitor will help track under-replicated partitions to see if replication is going as fast as configured.

With Applications Manager management tool, monitoring Kafka networks becomes easy. Get a full picture of the network usage on your host and track network throughput or aggregate incoming and outgoing byte rate on your broker topics to understand where potential bottlenecks lie. Make informed decisions like whether you should enable end-to-end compression of your messages.

With its powerful fault management system, Applications Manager Kafka management tool procures data on the faults that occur in the system, as well as drilled-down data on the origins of those faults. This speeds up the fault analysis and troubleshooting process considerably. It's easy to configure thresholds for various performance attributes and raise alarms whenever those thresholds are breached.

You can also associate actions, such as email/SMS escalation, Windows service action, and MBean operation, with thresholds. These can be performed automatically when thresholds are violated. Very few Kafka monitoring tools like Applications Manager allow you to set up anomaly profiles with dynamic baselines to investigate gradual performance degradation which might otherwise go unnoticed.

Get data-rich reports on all performance metrics

Applications Manager's Apache Kafka monitoring tool provides extensive reports on all important performance attributes. With these reports, you can analyze the historical trends of various metrics to make informed decisions. Along with Apache Kafka monitoring, Applications Manager also enables you to predict growth and utilization trends using machine learning techniques, which helps you during capacity planning.

What is Kafka monitoring and how to monitor Kafka?

Kafka monitoring is the process of supervising the resource usage and underlying operations in Kafka, to ensure its performance isn't affected. Kafka has grown considerably in terms of both volume and complexity, and being a crucial component in the IT infrastructure, it's necessary to implement a dedicated kafka monitoring software—like ManageEngine Applications Manager—to track its operations, identify and resolve bottlenecks, and optimize the performance.